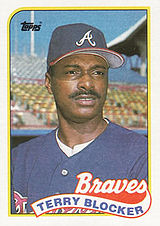 Blocker had been at Tennessee State University at the same time as Roy Johnson. In his first season in the minors, he hit .341 and slugged .570. Most of his minor league career was spent in the International League (parts of seven seasons).

When Blocker came to the 1985 Mets, he appeared mostly in left field, where the regular was George Foster and the backup was Danny Heep. The Mets won 98 games that year and were full of good outfielders looking for playing time: also getting a few games in left field were Mookie Wilson, Tom Paciorek and Clint Hurdle, among others. With the 1988 Braves, a team that lost 106 games, Blocker logged 505 innings in center field, while Albert Hall had 472 and Dion James had 336. The following year, 1989, Dale Murphy was the most-used player in both center field and right field.

Blocker was shocked in 1995 when Braves replacement player David Shotkoski was murdered during spring training. Terry, who had been chatting with David just the previous day, decided to track down the murderer, which involved spending time in the worst areas of town and interacting with very questionable individuals. He gathered information which he turned over to the police, and declined to accept the reward that was offered. Source: Baseball's Terry Blocker Finds a Teammate's Alleged Killer