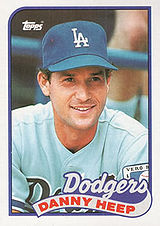 Danny Heep played 13 years in the majors from 1979 to 1991, never getting more than 320 at-bats. He was a pinch-hitter and back-up outfielder and first baseman whose ability to come off the bench kept him in the majors for more than a decade. He also was used twice as a pitcher in the Major Leagues.

When the Boston Red Sox had several outfielders injured in 1989, Heep responded by posting his best average, .300, in the year he was able to have 320 at-bats.

He appeared in post-season play with the Houston Astros, New York Mets, Los Angeles Dodgers and Boston Red Sox, winning World Series rings with both the 1986 Mets and the 1988 Dodgers.

The most similar player, according to the similarity scores method, is his contemporary Jerry Hairston Sr..

Heep is the nephew of big leaguer Matt Batts.