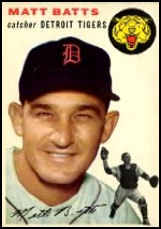 "He [ Joe McCarthy ] liked Matt Batts, the backup catcher. Batts had been a long shot to make the team in 1948, but Charlie Berry, who had been umpiring some Boston games in spring training, came over to Batts and said, 'Hey you, Batts. You want to make this team?' Batts said yes, indeed he did. 'Here's what you do, kid. You've got a good arm and you're throwing hard in infield practice, and I know old Joe McCarthy and he loves it. You keep doing it. You throw even harder. I'm watching McCarthy, and every time you do that his eyes light up and he chews that gum a little faster.' After that, during the drills Johnny Pesky would complain that Batts was throwing so hard that he was hurting his hand. But Batts paid him no attention; he just threw harder." - David Halberstam, from Summer of '49

Catcher Matt Batts logged 10 seasons in the major leagues, breaking in with the Boston Red Sox. A stocky, dependable and durable receiver, he was (curiously) a regular for only one season despite also being a good hitter. Blessed with a very strong throwing arm, his amazing career caught-stealing percentage of 47 is very high for a catcher.

While in high school in San Antonio, Texas, Matt was a football and baseball star and, after graduation, attended Baylor University. Before the 1942 season, he signed as a free agent with the Red Sox and was shipped off to the Middle Atlantic League Canton Terriers Class C team. Matt had a good first season, playing in 126 games, getting 142 hits that included 10 home runs in 483 at bats and batted .294. Matt was inducted into the United States Air Force in December 1942 and was stationed at Randolph Air Force Base in Texas. He was discharged in December 1945.

The 1946 season saw him with the New England League Lynn Red Sox where he probably had his best minor league season, hitting 12 home runs, batting .337 with a slugging percentage of .524. This performance got him a shot with the Eastern League Scranton Red Sox and from there he moved up to the AAA International League Toronto Maple Leafs, all in 1947. Matt spent the last part of 1947 with the Boston Red Sox, getting in 7 games, 16 at bats with 8 hits for a .500 batting average. Batts was in the major leagues until 1956; he was with the St. Louis Browns, Detroit Tigers, Chicago White Sox and the National League Cincinnati Redlegs, where he finished his major league career. Tigers radio announcer Van Patrick always fondly referred to him by his full name - Matthew Daniel Batts. In his 10 seasons, he played 546 games played with 1,605 at bats, 432 hits and a .269 batting average. He played with the Southern Association Nashville Volunteers in 1956, the Birmingham Barons of the same league in 1957 and finished his career with the Texas League's San Antonio Missions also in 1957.

After his baseball days were over, Batts opened a printing business in Baton Rouge, Louisiana, where he died in 2013 at age 91. He was the uncle of big leaguer Danny Heep.