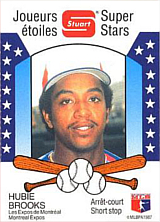 "He was a lot more valuable in reality than on paper; every team has a hole somewhere, and Brooks was a player who could fill that hole and not hurt you in the process." - Bill James

Hubie Brooks had the second most career at-bats of any 1978 first round draft pick. This is quite a feat as this group contained a number of productive major leaguers such as Lloyd Moseby, Rex Hudler, Tom Brunansky, Nick Esasky, Bob Horner, Buddy Biancalana and Kirk Gibson. Hubie was Horner's teammate at Arizona State; Horner played third base and Hubie shortstop. Bob was the first overall pick, by the Atlanta Braves, and Brooks third overall, by the New York Mets, with Moseby taken between them as the Toronto Blue Jays' top choice.

Brooks began as a third baseman for the Mets, winning the starting job in 1981 and holding it until 1984, even through some subpar years with the bat in 1982 and 1983, when he hit around .250 with no power. The home run swing came in 1984, when he hit 15 long balls and played enough shortstop late in the year to convince scouts he could do it full-time. The Montreal Expos acquired him after the season, in the trade that sent Hall of Fame catcher Gary Carter to the Mets, and made him their starting shortstop in 1985. The Expos had Gold Glove man Tim Wallach at third base, and he was not about to move. Brooks responded with a 100 RBI season and was awarded the Silver Slugger Award as the National League's best-hitting shortstop. He drove in those 100 runs with only 13 homers, but was the Expos' clean-up hitter all season, with Tim Raines in his prime, routinely on base in front of him. In 1986, he was hitting .340 when his season ended in early August because of a hand injury. In May that year, he was the National League's Player of the Month when he hit .341 with 7 homers and 24 RBI. Hubie was named to his first All-Star Game that year and repeated as the Silver Slugger Award winner, even missing about half the season. He missed more time early in 1987, when he had his other hand broken by a Danny Darwin fastball in the season's third game. He played well enough to return to the All-Star Game, finishing the year with 72 RBI in 112 games.

The Expos moved Brooks to right field in 1988, with Luis Rivera taking over at shortstop. He had his first 6 RBI game on April 4th and his first multiple-homer game on September 25. He hit .384 in September 1989, the highest batting average in the NL that month, to win his second Player of the Month Award; it came ironically as the Expos were in free fall, having led the NL East race most of June and July, only to collapse in early August and then barely finish at .500 with a continued September swoon. He left the Expos as a free agent after the 1989 season and signed with the Los Angeles Dodgers in 1990. In his first game for his new team, he won the Opening Day game with a three-run shot off Bruce Hurst in the 8th inning against the San Diego Padres on April 9th, winning the game, 4-2. He hit .266 with 20 homers and 91 RBI in his one year with the Dodgers, then was traded back to the Mets prior to the 1991 season. He also played one year with the California Angels and two more with the Kansas City Royals, who - typically - acquired him as he was nearing the end. He retired after the 1994 season, having played 1,645 games in the majors. He batted .269/.315/.403 with 290 doubles, 124 home runs and 824 RBI.

As a hitter, Brooks feasted on curveballs. As a fielder, he was not outstanding anywhere, but could play a number of positions passably, including third base, shortstop, right field and left field, which made him a very valuable player. He saw more than 100 games at shortstop, third base and right field.

Hubie was a cousin of All-Star reliever Donnie Moore.