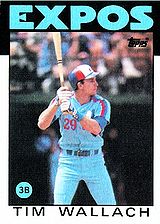 Third baseman Tim Wallach played seventeen seasons in the majors, primarily with the Montreal Expos, and was a five-time All-Star and three-time Gold Glove winner.

Wallach was one of the best performers in the 1978 Amateur World Series. He hit .395/.455/.763 as the first baseman for Team USA (Paul Zuvella manned third, Wallach's main position). He drove in 14 runs and scored 14 in 10 games, while hitting 4 homers and fielding .980. Tim tied Ernesto Lopez for second in the Series in homers, 4 behind leader Antonio Muñoz. He tied Muñoz for the most runs and was second to Muñoz in RBI. He ranked 4th with 15 hits. His excellent play helped the USA win a Silver Medal.

Wallach was signed as the first round pick in the 1979 amateur draft by the Expos and scout Jack Paepke. He then homered in his first pro at-bat that year with the Memphis Chicks. Wallach was called up by the Expos in September 1980 and duplicated the feat, hitting a home run off Phil Nastu of the San Francisco Giants in his first big league at-bat on September 6th; he had drawn a walk in his first plate appearance. Starting in 1982, he was Montreal's regular third baseman for eleven seasons. He had his best year in 1987, hitting .298 with 26 homers and 123 RBIs and leading the National League with 42 doubles, and he tied Pedro Guerrero for the NL lead with 42 doubles two years later. Overall with the Expos, he was selected to the NL All-Star Team five times, was awarded a Gold Glove three times, and was twice given a Silver Slugger Award.

Following the 1992 season, Wallach was traded to the Los Angeles Dodgers for minor league shortstop Tim Barker. He spent three years with the Dodgers, hitting 23 home runs in 1994, before becoming a free agent and signing with the California Angels for 1996. However, he was released by the Angels in July after hitting .237 with 8 homers in 57 games and was re-signed by the Dodgers. He was the club's regular third baseman for the remainder of the 1996 season but went hitless in the National League Division Series and retired as a player after the season.

Following his playing days, Wallach was a minor league hitting instructor in the Dodgers' system before becoming spending part of 1998 as manager of the San Bernardino Stampede of the California League. He moved on to the Angels organization as skipper of the Rancho Cucamonga Quakes in 2001 and was back with the Dodgers as the team's big league hitting coach in 2004 and 2005. In 2009, he took over as skipper of the AAA Albuquerque Isotopes. In 2011, he was back in the majors, this time as the Dodgers' third base coach. He later moved to bench coach under manager Don Mattingly, and when Mattingly was fired after the 2015 season and moved to the Miami Marlins, Wallach joined him as his bench coach in 2016, staying until the end of the 2019 season.