Note: This page is for 1980s pitcher Charlie Mitchell; for the 1890s umpire of the same name, click here. 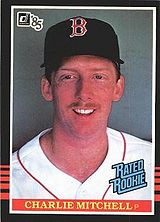 The older brother of John Mitchell, pitcher Charlie Mitchell was selected by the Boston Red Sox in the fourth round of the 1982 January amateur draft and made his pro debut that summer with the Elmira Pioneers, recording 9 saves for the team. After saving 13 for the New Britain Red Sox in 1983, he spent most of the following year with the Pawtucket Red Sox, going 10-4 with a 2.11 ERA and 15 saves there. That performance earned him a late-season call-up to Boston in 1984. He made his big league debut on August 9th versus the Texas Rangers, entering in the bottom of the 8th and giving up a solo home run to the first batter he faced, Pete O'Brien. Overall, in 10 games for the Red Sox that year, he recorded a 2.76 ERA with no decisions.

Back with Pawtucket in 1985, Mitchell saved 14 games and made two late-season appearances for Boston. Following the season, he was dealt to the Minnesota Twins for Mike Stenhouse, about a month after his brother John had been traded from the Red Sox to the New York Yankees. He played a year in the Twins chain and a season in the Detroit Tigers system before spending four summers with the Nashville Sounds in the Cincinnati Reds organization.

After several years away from U.S. pro ball, Mitchell played in the independent leagues with the Columbia Mules for two years. With his brother as one of his teammates, he led the Big South League with 12 saves in 1996.