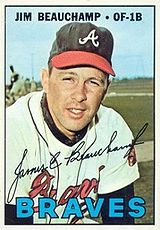 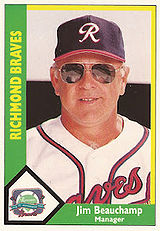 "My dad's motto was to put God first, family second and your job third. If you did that, everything would fall into place and good things would happen. And he lived that." - Kash Beauchamp

Former major leaguer Jim Beauchamp (pronounced BEE-champ) was the father of minor league player and manager Kash Beauchamp. He attended Oklahoma State University before being signed by the St. Louis Cardinals in 1958.

A power-hitting minor leaguer, Beauchamp had perhaps the best year of his professional career in 1963 for the Double-A Tulsa Oilers, batting .337 with 31 home runs and 105 RBI. He also collected 35 doubles and 10 triples while scoring 95 runs. He did so well, in fact, that he won the 1963 Texas League MVP Award. He earned a short call to the Majors that year, making his Major League debut on September 22 at the age of 24. The pitcher he faced in his first at-bat - Joe Nuxhall - struck him out. Overall, he went hitless in three at-bats that year. Although he was a promising prospect in the Cardinals organization, he was traded to the Houston Colt .45s in February 1964, with Chuck Taylor, for outfielder Carl Warwick. Beauchamp again dominated in the minors in 1964, belting 34 home runs and collecting 83 RBI for a .285 batting average. In 23 Major League games that year, he collected only nine hits in 55 at-bats for a .164 batting average.

Jim started the 1965 season with the renamed Houston Astros, playing in 24 games with them before being traded to the Milwaukee Braves, with Ken Johnson, for Lee Maye. He played in only four games with the Braves in 1965; overall, he hit .179 in 56 at-bats. Proving to be a minor league star who could not quite cut it in the Majors, Beauchamp hit .319 with 25 home runs and 77 RBI in 115 games for the Richmond Braves in 1966 but did not appear in the Majors at all that season. He spent most of the 1967 season in the minors as well, belting 25 home runs and driving in 63 runs for Richmond. His average dropped though, as he hit only .233. He appeared in four games in the Majors for the Braves that year, collecting no hits in three at-bats.

In October 1967, Beauchamp was traded, with Mack Jones and Jay Ritchie, to the Cincinnati Reds for Deron Johnson. He started the 1968 season in the minors, hitting 13 home runs and driving in 47 RBI for the Indianapolis Indians. He spent 31 games in the Majors that year, hitting .263 in 57 at-bats. He was traded twice more in the span of a few months, first back to Houston in December for Pat House and Dooley Womack, and again in June, to the St. Louis Cardinals, with Leon McFadden, for George Culver on June 13, 1970. He hit .238 between the two teams in 1970, and .235 in 77 games for the Cards in 1971 in what proved to be his busiest season in the majors. Following the 1971 season, Jim was involved in his sixth major league trade, from the Cardinals to the New York Mets, an eight-player deal. He began the 1972 season wearing uniform #24 for the Mets, but had to give it up in May when Willie Mays joined the team. Beauchamp switched to uniform #5. Jim hit two home runs in a game on August 21st of that year, his 33rd birthday. The second one came in the bottom of the 9th off Jim Ray to give the Mets a win over the Astros. These were Jim's first two homers of the season.

Beauchamp played his final regular season game on September 20, 1973, almost exactly 10 years after his big league debut. He finished his career by appearing in four games of the 1973 World Series, which the Mets lost to the Oakland A's. His last appearance was in Game 7 on October 21st. The last regular season pitcher Beauchamp ever faced was Jim Rooker. Interestingly, the last pitcher he faced in the 1973 World Series was Ken Holtzman, off whom Beauchamp had hit his first triple in 1971. He collected his final intentional walk and final run off pitcher Ramon Hernandez, but not in the same game. He singled in his final at-bat. His major league debut had been against the Cincinnati Reds, a team he would later play for. His main teammates were Tom Seaver, Joe Torre, Pete Rose, Jon Matlack, Rusty Staub, Wayne Garrett, Tony Perez, Lou Brock and Johnny Bench. Overall, he is statistically most similar to Dee Brown, according to the similarity scores method, with his contemporary Bob Burda a close second and a better comparison.

After managing in the minor leagues from 1975 to 1990, he was the Atlanta Braves bench coach for several seasons, spending 1991-1998 on the major league staff. He then became the Braves' minor league outfield coordinator. He died at the age of 68 on December 25, 2007, after a bout with leukemia.