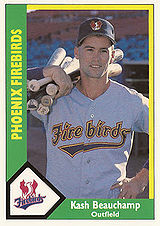 Outfielder Kash Beauchamp was selected by the Toronto Blue Jays with the first overall pick in the January 1982 amateur draft. He played in the minors for twelve seasons, reaching as high as AAA. He was the MVP of the 1984 Carolina League All-Star game where he went 5 for 6 with a homer, 2 triples and 5 RBI. The same year he was voted the Best Defensive Outfielder and Outfielder with the best arm in the Carolina League by Baseball America.

He also was the first position player signed out of independent baseball. He was the Most Valuable Player in the Northern League in 1993 where he won the batting title hitting .367 for the Rochester Aces before the Cincinnati Reds signed him and sent him to the AA Chattanooga Lookouts. As a "guinea pig" for Indy Ball he fared well going 24 for 60 with 6 2B and 5 HR in Chattanooga at the end of the season.

After his playing career ended, he managed various independent league teams. From 1995 to 1997, he was a hitting coach in the Montreal Expos farm system. From 1998 to 2000, he was skipper of the New Jersey Jackals, leading his club to the Northeast League championship in his first season. In 2001, he managed the Lincoln Saltdogs, and he led the Adirondack Lumberjacks for the next three seasons. He was the scouting director of the Golden Baseball League in 2005. Beauchamp took over as manager of the Pensacola Pelicans of the American Association in 2006. He then became the Vice President and Director of Baseball Operations for the newly-formed South Coast League in 2007. He returned to managing on July 20th, replacing Desi Wilson at the helm of the Anderson Joes. After the season, he was named manager of the new Wichita team in the American Association, but only held the position for one year.

He is the son of former big leaguer Jim Beauchamp.