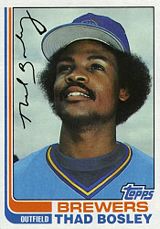 Thad Bosley had a 17-year career in organized baseball. He hit .272 in a major league career that spanned three decades. Thad was a very good pinch-hitter during his career, recording 80 hits in 290 at-bats (.276) with 8 home runs and 50 RBI. In 1976, he was the California League Most Valuable Player.

Bosley had not planned on a baseball career as a youth. He had considered being a writer, musician or inventor before settling on baseball, though he would revisit two of those other fields later in life. In high school, he played baseball against All-Star catcher Lance Parrish.

In the Angels system[edit]

Thad had never attended a California Angels game despite growing up in Southern California; after they took him in the 4th round of the 1974 amateur draft, he decided he would not step foot inside Anaheim Stadium until he made it there as a player. Bosley debuted professionally in 1974 with the Idaho Falls Angels, hitting .242/~.425/.291. He drew 71 walks in 68 games and scored 55 runs, leading the Pioneer League in walks (by 26) and was third in steals (27 in 36 tries). His 11 errors led the league's outfielders, though. In 1975, Thad moved up to the Quad Cities Angels and hit .298/~.415/.354, improving his contact and finishing 7th in the Midwest League in batting average. He stole 37 bases in 43 tries, finishing fourth in the MWL; Julio Cruz and Willie Wilson were two players with more. His fielding was crisper, as his .981 fielding percentage was tops among the league's regular outfielders, and he made the league All-Star team. Bosley's rise continued in 1976. He hit .324/~.420/.400 for the Salinas Angels, earning MVP honors in the California League and making the league All-Star team. He finished 8th in average, tied for sixth in walks (86), 4th in runs scored (105), second in hits (171) and led with 90 steals (and 17 times caught stealing). His 285 putouts led the league's outfielders as did his .977 fielding percentage while his 13 outfield assists tied for 4th. Thad promptly skipped Double A and started 1977 with a bang for the Salt Lake City Gulls, hitting .326/~.364/.433 with 23 steals in 32 tries. Had he qualified, he would have tied for 8th in the Pacific Coast League in average.

Instead, he got called up to the Angels and debuted on June 29, hitting 7th and starting in center field. He struck out in his first at-bat against Jim Colborn but went 2 for 4 on the day with a run scored, a triple and 3 RBI. On the year, he batted .297/.346/.363 for the Halos (tops on the club) for a 97 OPS+ despite being one of the 10 youngest players in the American League. That winter, Bosley was part of a major trade which sent him, along with Richard Dotson and Bobby Bonds, to the Chicago White Sox for Brian Downing, Chris Knapp and Dave Frost.

Bosley was signed as a free agent by the Oakland Athletics but, just over a month later, he was sold to the Chicago Cubs, his sixth organization. Chicago sent him to the Mexican League's Mexico City Tigers. Bosley recalls that "The playing the conditions in the Mexican League weren't bad - except for the heat. That's like saying that the first voyage of the Titanic wasn't bad - except for the iceberg." Bosley hit well, batting .327/~.424/.561, but lost 23 pounds in six weeks due to a virus and returned to the US to get better.

Bosley was getting tired of riding the pine and considered retiring on August 19. He had packed his things to return home and leave baseball after the game that day. He went through his usual Sunday routine of church and batting practice. In the fifth inning of a 6-6 game, he pinch-hit for Warren Brusstar with Jody Davis and Larry Bowa aboard. Bosley, suffering from a wrist injury which limited his power, took the pitch from Jeff Russell and hammered it into the second deck for a three-run homer, his first of the year with Chicago. It made him decide to stay in baseball. He hit .296/.375/.418 for the 1984 Cubs for a 116 OPS+, the lowest of a strong three-year run with the Cubs. He struck out in both of his at-bats in the 1984 NLCS.

Thad worked as hitting coach for the Oakland A's from 1999 to 2003. He became head coach of the Bethany Bruins in 2009-2010 and was announced as the coach of Arizona Christian University for 2011. He returned to the major leagues in 2011 as hitting coach of the Texas Rangers. That gig did not last long, as on June 8th, he was replaced by Scott Coolbaugh.

Bosley has recorded gospel music albums and written poetry as well since his playing days ended. He was a key component of Lenny Randle and The Ballplayers, who recorded the single "Kingdome" in 1981.