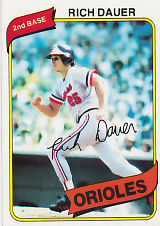 Rich Dauer played for the Baltimore Orioles for a decade. He was the starting second baseman on their pennant-winning 1979 team and the World Series Champion 1983 team. He hit a home run in a losing cause in Game 7 of the 1979 World Series, against Jim Bibby of the Pittsburgh Pirates.

Dauer was a star at the University of Southern California, posting the team's highest batting average in 1973 and 1974 and being named the team MVP in 1974. USC won the College World Series in both 1973 and 1974.

He was a first-round pick by the Orioles in the 1974 amateur draft, and hit .328 for the Asheville Orioles that year with 11 home runs in 53 games. The next year, split between Asheville and the Rochester Red Wings, his numbers were not as good, but in 1976 he was back up to a .336 average with Rochester. He shared the International League MVP award with Mickey Klutts and Joe Lis while leading the IL in hits (176). He made his major league debut in September of 1976, getting a single off Milwaukee Brewers starter Jim Colborn in his first major league at bat. Overall he had a very difficult introduction to the Major Leagues, going 4 for 39 for the Orioles that year. By 1978, though, he was the O's regular second baseman and set an American League record with 86 consecutive errorless games and 425 consecutive errorless chances. He was not much of a hitter in the majors, with career highs of 9 home runs in 1979 and 63 RBI in 1980. He batted .284 in 1980 and .280 in 1982, but his other seasons were .235 and .264, until he fell brutally to .202 in 1985, his last season. He did not draw many walks, but he also was extremely hard to strike out. Manager Earl Weaver liked him for his steady defense that was important in his teams built around strong starting pitching. For his first few years, he shared playing time with Billy Smith at second base, and he also played a lot of third base over the years, filling in for Doug DeCinces when his back acted up. Mostly, though, he was one of the batters whom Weaver would pinch-hit for in the late innings when necessary, later bringing in Lenn Sakata to finish the game at second.

In 1990, Dauer played and managed the the San Bernardino Pride of the Senior Professional Baseball Association. He was batting .333 in 7 games when the league ceased operations in December.

After his playing days ended, Dauer managed the San Bernardino Spirit in 1987 and was third base coach for the Cleveland Indians in 1990 and 1991. He later held the same job with the Kansas City Royals from 1997 to 2002. He was also the Milwaukee Brewers bench coach from 2003 to 2005. He was a finalist in consideration for the managerial position of the Orioles for 2004, but he lost out to Lee Mazzilli.

From 2006 to 2008, Dauer was as the Colorado Rockies Minor-league infield coordinator. In 2009 he joined the big league staff as the third-base coach and infield coordinator, a position he held through 2012. In 2013 he became manager of the San Antonio Missions, the Double A farm team for the San Diego Padres. The team finished in second place and then won the league championship in the Texas League playoffs. He managed the Missions again in 2014. In 2015, he was hired as first base coach and infield coordinator for the Houston Astros under new manager A.J. Hinch. He was in place when the Astros won the first World Series title in their history in 2017. He had already decided to retire when, the day before the victory parade in Houston, TX, he hurt his head in a fall but did not tell anyone. He began to feel noticeably woozy when introduced to the huge crowd packing the area in front of City Hall, alongside other members of the team. Manager Hinch immediately suspected that something was seriously wrong and he was rushed to a hospital, not an easy task with a crowd of approximately one million people milling around and blocking all nearby streets. He managed to be taken to the emergency room at Houston Methodist Hospital in time for a life-saving operation, as he was suffering from a brain hemorrhage and had gone into respiratory arrest. He recovered enough that he was able to spend a few days in the Astros' spring training as a guest instructor in 2018. On April 2nd, he threw the ceremonial first pitch at Minute Maid Park for the team's home opener. Hinch also invited him to come out of retirement for a couple of days to serve as a coach at the 2018 All-Star Game.