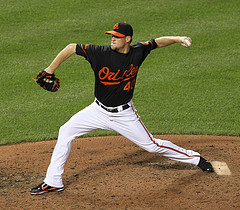 Troy Patton made his major league debut in 2007. Not known as a hard thrower (his fastball often read in the 80s), he was noted for his control.

Patton was picked by the Houston Astros in the 9th round of the 2004 amateur draft. He was signed by scout Rusty Pendergrass and debuted with the Greeneville Astros that year and was 2-2 with a 1.93 ERA in six starts. He struck out 32 and walked only 5 in 28 IP. Baseball America ranked him as the #10 prospect in the Appalachian League, right behind Alexander Smit. Patton helped pitch Greeneville to the title.

Patton made it to full-season ball at age 19. He had a 5-2, 1.94 record (94 K, 20 BB in 78 2/3 IP; 30 2/3 consecutive scoreless innings at one point) for the Lexington Legends and 1-4, 2.63 for the Salem Avalanche (38 K, 8 BB in 41 IP). Baseball America rated him the #4 prospect in the South Atlantic League, right behind Marcus Sanders and one spot ahead of Ryan Braun. They rated him the best pitching prospect in the league, ahead of Philip Hughes. Patton's 2.18 tied Casey Janssen for the 4th-lowest ERA in the affiliated minors, trailing Justin Verlander, Ray Liotta and Chuck James. In the 2005 Futures Game, Patton pitched 2/3 of a scoreless inning, striking out one and allowing no baserunners, but the US team lost 4-0 to the World squad.

In the 2006 Arizona Fall League, Patton was 2-0 with a save and 4.80 ERA. He walked 8 in 15 innings but fanned 17 for the Mesa Solar Sox. Baseball America ranked him as the league's #11 prospect, right behind Kevin Slowey.

The Astros called up Patton on August 23 for a start on August 25 against Pittsburgh to replace the injured Roy Oswalt. He retired his first batter, Nate McLouth, on a pop-up to Craig Biggio. Patton pitched scoreless ball until the 4th when Jose Bautista homered with Adam LaRoche aboard. Patton allowed another Bautista homer in the sixth and left with 3 runs allowed in 5 2/3 IP. He took the loss to Matt Morris, who was pitching his best game since joining Pittsburgh a month earlier.

Patton was 0-2 with a 3.55 ERA in 3 games for the 2007 Astros. In December, he was traded with Luke Scott, Matt Albers, Dennis Sarfate and Michael Costanzo to the Baltimore Orioles for Miguel Tejada.

In early 2008, Patton was diagnosed with a small tear in his left labrum, requiring season-ending surgery; he had been expected to compete for a spot in the Orioles rotation. In fact, he did not return to the major leagues until 2010, when he pitched two-thirds of an inning in a single big league appearance. He finally got more than a look-see in the big leagues in 2011, when he made 20 relief appearances for the Birds, going 2-1 with an ERA of 3.00. In 2012, he was a productive member of the bullpen as the Orioles surprised everyone by battling the New York Yankees for the AL East title until the last day of the season. He was 1-0, 2.43 in 54 outings, pitching 55 2/3 innings. He struck out 49 and gave up only 12 walks. He pitched three times against the Yankees in the ALDS, giving up a run in 2 innings.

Now an established major leaguer, Patton pitched 56 times with the Orioles in 2013, all in relief. His record was 2-0, 3.70, as he pitched 56 innings as a set-up man for Jim Johnson. He struck out 42 and walked 16. On December 20th, however, it was announced that he had been suspended for 25 games by Major League Baseball at the start of the 2014 season after testing positive for amphetamines late in 2013. Patton admitted his guilt, saying he had made the mistake of taking an adderall pill late in the season "to improve his focus", feeling the strain of a long year. He had previously tested positive in 2010, and as a result of this first trespass was being followed closely by MLB with follow-up tests. He tested positive again after the 2014 season, once again for an amphetamine, and this time was handed an 80-game suspension. He was a free agent after going 0-1, 8.10 with the Orioles, and 0-0, 2.45 in 8 games for the San Diego Padres following a trade in return for C Nick Hundley on May 24th. The 80-game suspension will be served when/if he signs with a new organization.