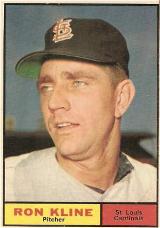 Right-hander Ron Kline was signed as an amateur free agent by the Pittsburgh Pirates before the 1950 season. The 18-year-old spent his initial season with the Bartlesville Pirates of the class D Kansas-Oklahoma-Missouri League and won 5 and lost 2 with a 3.81 ERA. 1951 saw him back with Bartlesville, this time going 18-4 with a 2.51 ERA. Ron's 18 wins and 208 strikeouts led the league and made him the starting pitcher in the KOM All-Star game. He finished the year with the New Orleans Pelicans of the AA Southern Association, going 1-3 with a 3.86 ERA.

In 1952 Ron pitched for the Burlington-Graham Pirates of the class B Carolina League going 3-6 with a 3.51 ERA and also got his first look at major league hitters at Forbes Field in Pittsburgh, appearing in 27 contests without much success, going 0-7 with a 5.49 ERA. He then spent the next two years (1953-1954) in the United States Military during the Korean War.

As a starting pitcher for the Pirates that first season and from 1955 to 1959, he struggled to a 53-83 record, leading the National League in losses in both 1956 and 1958; he also led the league in wild pitches in 1956. He was traded to the St. Louis Cardinals after the 1959 season, missing out on Pittsburgh's 1960 World Series Championship. He moved over to the American League in 1961 with the expansion Los Angeles Angels and the Detroit Tigers, before becoming one of the league's better relievers while with the Washington Senators from 1963 to 1966. The 6' 3" right-hander had four straight good years in Washington, picking up 73 saves including a league-leading 29 in 1965.

Kline was the only pitcher to defeat all of the Brooklyn Dodgers, the Los Angeles Dodgers, the New York Giants, the San Francisco Giants, the New York Yankees and the New York Mets during regular season games. Warren Spahn and Vern Law also accomplished the feat but their victories against the Yankees came in World Series competition. He is credited with one game at third base, in addition to his pitching appearances, but he never actually took the field at the position. On July 8, 1955, the Pirates and Philadelphia Phillies resumed a suspended game begun on May 29th, with the Pirates batting in the bottom of the 7th inning. The Bucs' third baseman, George Freese, had in the meantime been sent down to the minors and manager Fred Haney did not want to name a replacement immediately, in case there was a change of pitcher. He inserted Kline, the previous day's starting pitcher, into the line-up as his third baseman, then, when the Pirates took the field in the top of the 8th, replaced him with Dick Cole, who finished the game.

Following his retirement from baseball, Kline served as mayor of Callery, Pennsylvania, his home town. Callery is a small town (pop. 444), located in Butler County, about 30 miles north of Pittsburgh. Kline died on June 22, 2002 at his home and was ill with heart and kidney problems at the time of his death. His death happened on the same day that Cardinals pitcher Darryl Kile was found dead in a hotel room in Chicago.