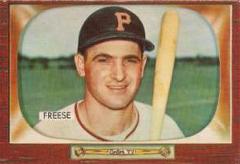 The brother of Gene Freese, George Freese got most of his major league at-bats in 1955 as the other third baseman on the Pittsburgh Pirates. Rookie Gene appeared in 65 games at third while George appeared in 50 games at the position. Gene was a better fielder and had more power while George had a higher batting average and on-base percentage. On May 1st, he hit an inside-the-park grand slam, but he was sent down to the minors at the end of a doubleheader on June 12th. He was hitting .257 with 3 homers and 22 RBI at the time, but would not return to the big leagues until six years later, when he played 9 games for the Chicago Cubs in 1961.

After his playing career ended, Freese was a member of the Cubs' coaching staff in 1964 and 1965 and was a minor league manager. Freese also scouted for the Cubs from 1964 to 1970.