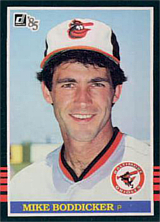 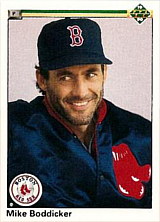 “I really just wanted to pitch one day in the big leagues. All the way through the minors, there were always kids better than me as far as physical ability. I knew what I wanted to do – and as long as I stayed healthy, learned and kept getting better – I had that chance." - Mike Boddicker, to the Des Moines Register, August 13, 2000

Pitcher Mike Boddicker built a successful major league career less on overwhelming stuff and more on guile and out-thinking hitters. Boddicker had a fastball that topped out in the high-80s, but threw a variety of curveballs at different speeds (in his New Historical Baseball Abstract, Bill James named Boddicker’s curve the best of the 1980s) and a unique "foshball" that baffled American League hitters. By changing speeds, throwing pitches at different angles, and keeping batters off balance, Boddicker was able to frustrate opponents. Rod Carew once described Boddicker’s pitching repertoire as "worse garbage than the stuff I take out at night," but it smelled sweet to the 1983 Orioles, as Boddicker helped them win a world championship in his rookie season.

Boddicker hailed from the small town of Norway, Iowa (pop. 633). When he became a big league star, much was made of the fact that he had spent previous winters working in grain elevators in Norway for $4.50 an hour. He was drafted by the Montreal Expos out of high school in the 1975 amateur draft, but chose to enroll at the University of Iowa instead. Boddicker was named to the third-team All-Big 10 team as a third baseman after his freshman year, but decided to concentrate on pitching after that season. In his junior year, 1978, he led the NCAA with 11.5 strikeouts per 9 innings. He signed as a 6th round pick in the 1978 amateur draft with the Baltimore Orioles and scout Joe Bowman. Fifteen weeks later, he was playing in AAA for the Rochester Red Wings. He would be stuck at Rochester for most of the next four years, although he made brief appearances in Baltimore in 1980, 1981, and 1982. There were reports that Earl Weaver was not impressed with Boddicker’s stuff and he seemed to be cast in the role as the last guy off the staff.

Boddicker finally got his big break in May 1983 when Jim Palmer went down with an injury (by then, Joe Altobelli had succeeded Weaver as O's manager). He was called up to Baltimore, inserted into the starting rotation, and was immediately successful as he introduced American League batters to his "foshball." Boddicker had developed the foshball while trying to learn a forkball at Iowa. The pitch slipped out of his hand, had a slight rotation and broke like a screwball. Boddicker labeled it a "forkscrew," but Orioles pitching coach Ray Miller came up with "foshball," a cross between a forkball and a "dead fish" (another term for "change-up"). Twelve days after he was called up, Boddicker tossed a shutout against the Chicago White Sox. He finished the year 16-8 with a 2.77 ERA, and led the league in shutouts, fewest hits per nine innings and opposing batting average. He finished third in voting for the 1983 American League Rookie of the Year Award, and was named AL Rookie of the Year by The Sporting News. The highlight of Boddicker's season came in the 1983 ALCS against the White Sox. After the Orioles lost the first game, Boddicker was assigned to start Game 2. He struck out 14 White Sox, tying a Championship Series record, while tossing a five-hit shutout as the O's beat the Sox, 4-0. Baltimore went on to win the next three games to capture the pennant, and Boddicker was named ALCS MVP. Boddicker then tossed a three-hitter with no walks and gave up just one unearned run to win Game 2 of the World Series, sparking the Orioles’ World Series Championship over the Philadelphia Phillies. He also had the only RBI of his major league career, driving in a run on a sacrifice fly in the second at bat of his professional career, and struck out three all-time greats during the game: Joe Morgan, Pete Rose, and Mike Schmidt.

Boddicker had his finest major league season for the 1984 Orioles, going 20-11 with a 2.79 ERA and finishing fourth in balloting for the 1984 American League Cy Young Award. In the process, he became the first Oriole to lead the league in both ERA and victories. However, he would never match the success of his first two seasons. His pitching slipped for the 1985 Orioles and he finished just 12-17 after getting out to a 6-1 start. His hits and walks allowed both increased dramatically, even though he pitched 58 fewer innings than he had in 1984. There were reports he was tipping his change-up, but he also was bothered by tendinitis in his right knee late in the year, which ended his season on September 19. Boddicker had another difficult season for the 1986 Orioles, finishing with a 4.70 ERA. He went on the disabled list in April with a torn ligament in the middle finger of his right hand, and it reportedly hindered his ability to throw breaking pitches throughout the season. After starting the year 10-1 with a 3.48 ERA, he slumped badly in the second half, finished the year with a seven-game losing streak, and failed to win a game after August 4th. His pitching improved for the 1987 Orioles, as his ERA+ rose from 88 to 106, but the team had become terrible, falling to the bottom of the American League East standings. Things went for bad to worse for the pitiful 1988 Orioles, who lost their first 21 games of the season. Boddicker lost 13 consecutive decisions between September 1987 and May 1988. But he was still a solid starting pitcher, and soon became the object of trade desires for the contenders in the American League East - the Blue Jays, Brewers, Red Sox, and Yankees.

Rumors swirled around Boddicker all summer until finally, on July 29th, he was traded to the Boston Red Sox for minor league prospects Brady Anderson and Curt Schilling. The trade is often maligned as one of Boston’s worst, because Anderson and Schilling both went on to long, successful major league careers. At the time, Red Sox GM Lou Gorman was hailed for making a deal that gave the Sox the edge in the division race, and the Sox did go on to win their division, thanks in no small part to Boddicker's contribution. He went 7-3 with a 2.86 ERA for the Sox, 3-0 with a 1.96 ERA in his final six starts, and allowed three earned runs or less in 13 of his 14 starts overall. Mike was knocked out of his only 1988 American League Championship Series start in the third inning as the Oakland Athletics swept the Red Sox. He spent two more full seasons in Boston, and had probably his best season since 1984 in 1990 as he helped the Red Sox win a division championship. Highlights included a 10-game winning streak from April 30 to July 2, a 6-0 record in his final nine starts of the season, winning the division-clinching game on the last night of the season against the Chicago White Sox, and winning his first and only Gold Glove. In his only ALCS start against the Oakland A's, he pitched a complete game but lost, 4-1.

After 1990, Boddicker filed for free agency and signed a three-year contract with the Kansas City Royals. While expectations were high with the Royals, he was just average in 1991. After getting off to a strong start, he went on the disabled list in May with an elbow ligament strain, and was mediocre when he returned. After losing his first two starts for the 1992 Royals, he was shifted to the bullpen, where he spent the bulk of the year. He ended up suffering the worst season of his career, and an 0-4 record with a 6.69 ERA in his eight starts suggested he was nearing the end of the line. The Royals sold his contract in April 1993 to the Milwaukee Brewers and, after another ineffective year, he retired at the end of the season.

A 2002 article on mlb.com reported that Boddicker was living in the Kansas City area where he owned a few farms, helped coach youth baseball, and occasionally pitched batting practice for the Royals. He established the Mike Boddicker Scholarship at his alma mater for "a member of the Iowa baseball team who is in good academic standing and displays outstanding character and personality".