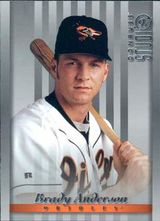 Brady Anderson averaged 9 home runs during the first eight years of his major league career. In 1996, he shocked the baseball world by hitting 50 homers, never hitting more than 24 in any other season. His 50 homers in 1996 was the all-time record for the Baltimore Orioles until bested by Chris Davis in 2013.

Anderson was signed as a 10th round pick in the 1985 amateur draft by the Boston Red Sox and scout Joe Stephenson. He first came up with the Red Sox at the start of the 1988 season but was sent to the Orioles at the trading deadline, alongside pitcher Curt Schilling, in the trade that netted Boston pitcher Mike Boddicker. Boddicker helped the Sox clinch the AL East title in 1988 and 1990, but Anderson and Schilling both became stars.

Always an excellent defensive center fielder, Anderson had trouble hitting major league pitching in his first few seasons, never posting a batting average higher than .231 between 1988 and 1991. As a consequence, he could not claim a full-time job during those years. Things changed dramatically in 1992 when he hit .271 with 98 walks, 59 extra-base hits and 53 steals to make the All-Star team. He became the first American League player to hit 20 home runs, steal 50 bases and drive in 75 runs in a season. He also had the best double play ratio in the league - he grounded into only 2 double plays in 110 chances. He remained a star contributor until 2000.

Although his batting average was never anything to write home about, his combination of on-base skills (not only did he draw walks, but he also led the AL in hit-by-pitch three times), power and speed made him an outstanding leadoff hitter. His great home run-hitting season was an aberration, but he was always in double figures in homers from 1992 to 2000, a plus given all the other areas in which he contributed on both offense and defense. On August 21, 1999, he became just the third player in major league history to lead off both games of a doubleheader with a homer, doing so against the Chicago White Sox. Only Harry Hooper (1913) and Rickey Henderson (1993) had accomplished the feat before him; it would take until 2018 for another player to join the exclusive club, when rookie Ronald Acuna did so on August 13th.

Of all the retired players to have hit more than 50 home runs in a season, Anderson finished his career with the fewest total home runs, with 210. He is by far the most prominent major leaguer to come out of UC Irvine.

He played more games in the outfield than any other player in the history of the Orioles franchise, including its days as the Milwaukee Brewers and St. Louis Browns. His longevity was badly overshadowed by that of teammate Cal Ripken, who was already a long-established star when Anderson joined the Orioles in 1988: Ripken played over 1,200 more games for the Orioles than Anderson. Both left the team after the 2001 season, Ripken retiring and Anderson playing unsuccessfully for a couple of months with the Cleveland Indians in 2002. Two years later, Brady was inducted into the O's team Hall of Fame.

Brady is one of three major league baseball players to guest star on ABC's Sabrina the Teenage Witch.