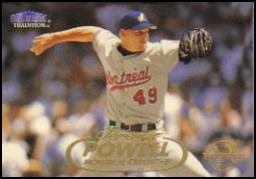 In 1997, the Californian right-hander went 9-10 with a 3.02 ERA for the West Palm Beach Expos and led the staff after Vázquez was promoted to AA. He began 1998 with the Harrisburg Senators, going 9-7 with a 3.01 ERA. He tied Jim Brower for third in the Eastern League in ERA behind Mike Kusiewicz and J.D. Arteaga.

Powell was promoted to the majors in late July of 1998. He had a strong debut, allowing two runs (one earned) in six innings on July 23rd, but losing a 2-1 duel to Mark Clark. He won his next outing, tossing six shutout frames to lower his ERA to 0.75. He then hit the skids, losing his five other games for the Expos while allowing a 14.54 ERA.

Jeremy's career slid downhill in 2000. He was 0-3 with a 7.96 ERA for the Expos and 5-13 with a 6.91 ERA for Ottawa. His 97 earned runs allowed tied Pat Daneker for the International League lead. He was signed by the San Diego Padres and turned his career around in 2001, going 4-2 with a 1.59 ERA in 11 starts for the Portland Beavers, with a teeny .169 average allowed and .77 WHIP (especially good by Pacific Coast League standards).

That drew the interest of the Kintetsu Buffaloes, who boasted plenty of firepower with Tuffy Rhodes and Norihiro Nakamura but who desperately needed pitching help with players such as Ken Kadokura and Katsuhiko Maekawa getting raked over the coals. He debuted in decent form in 2001, going 4-5 with a 4.95 ERA. Given Kintetsu's porous rotation, Powell got the start in game one of the 2001 Japan Series. He lost that game to Kazuhisa Ishii then was roughed up in game five, another loss to give the Yakult Swallows the title. He was 0-2 with a 9.00 ERA for the Series, even worse than Kintetsu's staff as a whole (6.00 ERA).

Powell had his best Japanese season in 2002, with a 17-10, 3.78 record. He fanned 182 and walked 41 in 216 2/3 IP. He led the Pacific League in wins (2 ahead of Fumiya Nishiguchi and Nate Minchey), strikeouts (2 more than Nishiguchi), shutouts (4), hit batsmen (21), earned runs allowed (91) and runs surrendered (94). Despite not finishing in the top 10 in ERA, the workhorse won Best Nine honors as the league's top pitcher. He also made the only All-Star team appearance of his Nippon Pro Baseball career.

Powell was 14-12 with a 4.13 ERA for the Buffaloes in 2003. He tied for the league lead with 10 hit batsmen. He was second on Kintetsu in ERA behind Hisashi Iwakuma. In 2004, Jeremy had a 8-8, 3.90 record. Kintetsu merged with the Orix BlueWave to form the Orix Buffaloes in 2005. With Iwakuma leaving, Powell was the combined club's top starter at 14-12, 3.51. He was 10th in the Pacific League in ERA. His 10 hit batters tied Kazumi Saitoh and Daisuke Matsuzaka for the league lead. That year, he hit the first interleague home run by a Pacific League pitcher (the PL uses a Designated Hitter rule in intraleague games), going deep off Tetsuya Utsumi on May 11.

A free agent, Powell hoped to improve his chances of being in a pennant race again by joining the Yomiuri Giants. Early in the 2006 season, he came one inning shy of three consecutive shutouts, which would have made him the first foreigner to accomplish that in Nippon Pro Baseball since Gene Bacque in 1966. By winning 10 games that year, he became the first gaijin to win 10 games for three different NPB teams (Kintetsu, Orix, Yomiuri). He was 10-10 with a 3.31 ERA and led the Central League by plunking 11 hitters. He was 10th in the CL in ERA, right behind teammate Koji Uehara. His 196 hits allowed were second to Daisuke Miura.

Jeremy then came back to the USA, signing a minor league deal with the Pittsburgh Pirates for 2009.