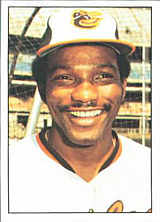 Elrod Hendricks was the sixth man from the U.S. Virgin Islands to reach the majors and the second from St. Thomas after Al McBean. He was a member of two World Series champion teams with the Baltimore Orioles, one as a player (1970) and one as a coach (1983).

Ellie signed with the Milwaukee Braves as a free agent in March 1959 after Hank Aaron visited the Virgin Islands along with some Braves scouts. Hendricks was assigned to the McCook Braves of the Nebraska State League, where he batted .235 (8-34) with no homers and 3 RBI. His teammates included Phil Niekro and Pat Jordan, author of A False Spring. He played for the Wellsville Braves in 1960, batting .235 with 11 HR and 36 RBI. After the Braves released him, he was out of baseball for all of the 1961 summer season, although he was playing in the Puerto Rico Winter League with the Santurce Crabbers. This helped him sign with the St. Louis Cardinals on November 21, 1961.

In 1976, Hendricks appeared in 28 games with the Orioles, batting .139 (11-79) with 1 HR and 4 RBI before being traded to the New York Yankees, with pitchers Doyle Alexander, Jimmy Freeman, Ken Holtzman, and Grant Jackson for pitchers Dave May, Tippy Martinez, Dave Pagan, Scott McGregor, and catcher Rick Dempsey. Hendricks finished the year with the Bronx Bombers batting .226 (12-53) with 3 HR and 5 RBI. The Yankees reached the World Series that year, although Ellie was only used as a pinch-hitter in the postseason, with Thurman Munson getting all the starts at catcher. In 1977, Hendricks spent most of the year with the AAA Syracuse Chiefs, batting .281 with 11 HR and 37 RBI, and only played 10 games with the Yankees, batting .273 (3-11) with 1 HR and 3 RBI.

The Yankees let Hendricks go as a free agent after the 1977 season, and the Orioles signed him on November 23rd. By this time, Hendricks was a coach but was activated twice, once in 1978, as Weaver needed a fill-in while outfielder Gary Roenicke was temporarily sent to the minors. Ellie batted .333 in 13 games, also pitching 2 1/3 scoreless innings and giving up only one hit in a 24-10 blowout loss to the Toronto Blue Jays. In 1979, Hendricks made one last playing appearance, going 0 for 1 in 1 game.

Following his full-time retirement as a player, Hendricks maintained the role of Orioles bullpen coach. He held this position for 28 seasons, starting in 1978 and continuing through 11 changes of manager. Ellie was mentioned as a managerial candidate himself on several occasions, but he only ever served a couple of stints as acting manager in 1988 while Frank Robinson had a bad back.

A son from his first marriage, Elrod Hendricks, Jr., was signed to a minor league contract in 1983. Two sons from his second marriage, Ryan Hendricks and Ian Hendricks, played in the minors in the 1990s.

Ellie was re-assigned by the Orioles after the end of the 2005 season. He had suffered a mild stroke that April. In December 2005, Hendricks died of a heart attack, one day before his 65th birthday. No Oriole has worn his #44 since his passing.