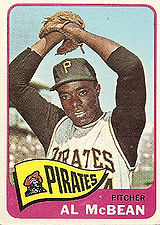 Alvin O'Neal "Al" McBean, the first big-league pitcher from the Virgin Islands, was a good one. His hard sinker and limber, resilient arm made him valuable as a starter and even more as a reliever. Throwing from various arm angles as the spirit moved him, McBean was somewhat reminiscent of Orlando Hernandez, the more recent hurler from Cuba. But what really distinguished the St. Thomas native - whom Red Schoendienst called "the funniest man I've ever seen in a baseball uniform" - was his love of playing for the crowd. Al had a name as a flashy, "mod" dresser too.

His 22 saves in 1964 were second in the National League (only one behind the leader).