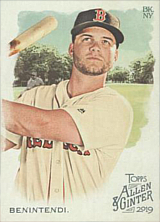 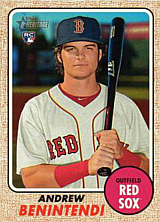 Outfielder Andrew Benintendi was selected by the Cincinnati Reds in the 31st round of the 2013 amateur draft but did not sign, opting to attend the University of Arkansas. He was taken by the Boston Red Sox with the seventh overall pick in the 2015 amateur draft. A few days later, he was named the winner of the Dick Howser Trophy, given to the best collegiate player in the country, on the strength of a junior season in which he hit .380/.489/.715 with 19 homers and 47 walks. He also won the Golden Spikes Award. He soon made his pro debut with the Lowell Spinners. In his first pro season, split between Lowell of the New York-Penn League and the Greenville Drive of the South Atlantic League, Andrew hit for a combined .313/.416/.556 with 11 homers and 31 RBI in 54 games, confirming his place as one of the top hitting prospects in the minor leagues. In 2016, he began the season with Class A Salem Red Sox, but after a little more than a month, during which he hit a scorching .341, he was promoted to the Portland Sea Dogs of the Double A Eastern League. He was named to the United States team in the 2016 Futures Game and was the lead-off hitter in the game. On August 1st, he was hitting .295 and slugging .515 in 63 games for Portland when Boston announced that they were calling him up to the big leagues.

Andrew was expected to initially share left field duties with Brock Holt and Bryce Brentz. He made his debut on August 3rd, coming on as a pinch-hitter for Brentz in the 7th inning of a 5-4 loss to the Seattle Mariners, later striking out against Edwin Diaz in the 9th to end the game after replacing Brentz in left field. He collected his first two big league hits the next day, starting the game in left field and batted 9th facing Hisashi Iwakuma, going 2-for-3 in a 3-1 loss. On August 7th, he had three hits, two RBI, a run and a stolen base in an 8-5 loss to the Los Angeles Dodgers, completing an excellent first week. He continued his great hitting with his first game at Fenway Park on August 9th, going 3-for-3 in a 5-3 win over the New York Yankees. He barely missed hitting his first career home run, as it took a video review to determine his line drive off the center field wall at the point where it meets the Green Monster had not, in fact, left the park before bouncing back onto the field. On August 22nd, he made the news for his defensive ability, as he made a tremendous catch in the outfield, robbing the Tampa Bay Rays' Steven Souza of a home run by climbing way up the wall in the left field corner at Tropicana Field, grabbing the ball that was well over the wall, then almost flipping over before managing to regain his balance, holding on to the ball all the time. Only three days later, on August 25th, he was placed on the disabled list with a left knee sprain. He suffered the injury trying to avoid a tag at second base the previous day. He finished the season at .295 with 2 homers and 14 RBI in 34 games, then started all three games of the ALDS against the Cleveland Indians, going 3 for 9 with a double and a homer as the Red Sox were swept.

Benintendi entered 2017 as many observers' choice to be the Rookie of the Year in the American League, some even calling him the next great Red Sox left fielder in the line of Ted Williams, Carl Yastrzemski and Jim Rice. That was a lot to live up to but, at least on Opening Day, he did. Facing the Pittsburgh Pirates on April 3rd, he hit a three-run homer off Gerrit Cole in the 5th to lead Boston to a 5-3 win. He hit .333 in April, then slowed down in May when he batted only .204, but picked up the pace again in June. He had his first two-homer game on June 4th in a 7-3 win over the Baltimore Orioles then, on June 13th, had the first walk-off hit of his career, when he drove in Xander Bogaerts with a 12th-inning single off Luis Garcia, giving the Red Sox a 4-3 win over the Philadelphia Phillies. On July 4th, he had a five-hit game, homered twice, drove in 6 runs and also made a great catch in left field in an 11-4 win over the Texas Rangers. He was the first Red Sox rookie ever to have two five-hit games in a season, the first one having come on April 23rd. A day earlier, his two-run bloop single in the 11th inning provided the margin of victory in a 7-5 win over Texas. On August 12th, he hit a pair of three-run homers in an important 10-5 win over the New York Yankees with Boston fighting to maintain its slim lead over the Bronx Bombers. He started the month on a tear, going 15-for-31 with 4 homers and 5 steals and ended up being named the American League Rookie of the Month on the strength of a .333 average, 18 runs scored, 19 RBI and 6 homers. He finished second in Rookie of the Year voting, behind the juggernaut Yankees rookie Aaron Judge, and batted .271 with 20 home runs and 90 RBI in 154 games.

Andrew continued to play well in 2018, and was a candidate for the American League Final Man Vote at the All-Star Game, with a slash line of .293/.379/.515 at vote time. He would ultimately lose out to Jean Segura of the Seattle Mariners and finish the season a .290 hitter with 16 homers and 87 RBI in 148 games; he also scored 103 runs, putting him 6th in the league. In the postseason, Andrew made a tremendous catch to end Game 4 of the 2018 ALCS and seal Boston's 8-6 win over the Houston Astros on October 17th. With two outs and the bases loaded, he grabbed Alex Bregman's sinking line drive inches off the ground in a spectacular play. After the season, on December 22nd, the Associated Press voted the catch as its "Play of the Year" in a poll covering all sports played in 2018. He batted .333 in 18 at bats in the World Series, a five-game triumph over the Los Angeles Dodgers.

His numbers took a step back in 2019, as he batted a career low .266 with 13 homers and 68 RBI in 138 games. On July 27th, he hit the shortest home run of the season. His pop-up off CC Sabathia of the Yankees barely traveled 310 feet but landed just inside the Pesky Pole at Fenway Park and was ruled a homer after a video review (it was originally called a double). According to statcast, the expected batting average on such a hit was a whopping .010, but he hit it in just the right spot in the right ballpark. The Red Sox missed the postseason in 2019, but that was nothing compared to the 2020 season, when Boston had a terrible season and Andrew suited up for only 14 of their 60 games - that was the season that was decimated by the COVID-19 pandemic - and hit .103 with just 1 RBI, the result of going 4 for 39. His season was sunk by a rib injury. Belying the motto that you should never trade a player when his value is at his lowest, the Red Sox did just that before the 2021 season, as exactly one year after their controversial trade of Mookie Betts, they sent Benintendi packing on February 10th. In this case, it was part of a three-team deal, with the Kansas City Royals obtaining him in return for OF Franchy Cordero, P Josh Winckowski and two players to be named later; the Royals had just obtained Winckowski from the New York Mets in return for another prospect, OF Khalil Lee.