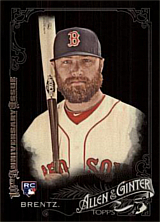 Bryce Brentz was a supplemental first-round pick by the Boston Red Sox in the 2010 amateur draft. He saw action with the big league Sawx on two non-consecutive occasions.

Brentz hit .417 in high school and was All-State as a senior. The Cleveland Indians took him in the 30th round of the 2007 draft but he opted for college. As a freshman at Middle Tennessee State University, Brentz hit .329 with 18 homers and 68 RBI, almost exclusively as a designated hitter. As a pitcher, he had a 1-0, 2.20 record with a .178 opponent average. He was named Sun Belt Freshman of the Year and Collegiate Baseball named him a Freshman All-American. In 2009, the sophomore fell to 5-3, 4.57 on the bump but hit .465/.535/.930 with 28 home runs, 79 runs scored and 73 RBI. He led D-I in average and slugging (.068 over runner-up Devon Dageford), was 4th in OBP, tied Kent Matthes for the home run lead, tied for 31st (with Dustin Ackley among others) in RBI, tied for 10th in runs scored, was third in hits (behind Ackley and Braeden Riley) and led in total bases (214, 11 over Ackley). He was named Sun Belt Player of the Year and Baseball America and Collegiate Baseball named him their All-American utility man. The ABCA also picked him first-team, as an outfielder. Bryce hit .366 for Team USA's college edition in the summer of 2009. His junior year was marred by injury and he fell to .348 with 15 homers and a .636 slugging while being named All-Sun Belt once again.

Boston chose Brentz 36th overall in the 2010 draft; the pick was compensation for the loss of Billy Wagner (as was their earlier selection of Kolbrin Vitek). He was the second highest pick in Middle Tennessee State annals, following Dewon Brazelton. Scouted by Danny Watkins, he signed quickly for a reported $889,000 and was sent to the Lowell Spinners, where he was 1 for 11 with a walk, 4 whiffs and two RBI (plus an error) in their first three games. He finished the season hitting only .198 with 5 homers and 38 RBI in 69 games. After that disappointing debut, Brentz quickly moved up the Red Sox organizational ladder. In 2011, he had a very good season for two Class A squads, the Greenville Drive and the Salem Red Sox, hitting a combined .306 with 25 doubles, 30 homers and 94 RBI. He started off red hot, hitting .359 in 40 games in the South Atlantic League before being promoted on May 21st. In 2012, he continued to distinguish himself as a top prospect, with 122 games with the Portland Sea Dogs of the AA Eastern League, hitting ,296 with 17 homers and 76 RBI as the team's right fielder. He also played in AAA for the first time, but was only 2 for 17 in 5 games with the Pawtucket Red Sox. Heading into 2013, Brentz was invited to Red Sox spring training as a non-roster player. While he stood little chance to make the team, he was clearly someone the team was looking at as a future major leaguer. He almost destroyed all of that with an unfortunate incident in January, when he accidentally shot himself in the leg while cleaning a handgun at home; the bullet went straight through the leg without hitting a bone and Brentz was lucky that the damage was relatively minor, although it cost him a chance to join the big league team in camp. Brentz is an avid hunter, both with guns and a bow and arrow. He returned with the PawSox, missing more time during the summer with a torn meniscus, and was added to the 40 man roster after the season, batting .262 with 19 homers and 64 RBI in 88 games.

Following another year in Pawtucket, this time as a member of the Governors Cup champions, he made his big league debut against the Pittsburgh Pirates on September 17, 2014, singling off Francisco Liriano in his first at bat. Injuries began to erode at Bryce's prospect status again in 2015. He missed much of the year with hamstring trouble and was unable to get the call back from Pawtucket. After missing the opening of the 2016 season with an oblique injury, he clawed his way back to the big leagues for 25 games. He was outrighted off the 40 man roster before the 2017 season but re-added following the season, when he was a Triple A All-Star and Home Run Derby champion. He was traded to the Pittsburgh Pirates before the 2018 season, when they were stockpiling left field options. When Pittsburgh acquired Corey Dickerson, it made Brentz expendable and he was claimed on waivers by the New York Mets on the eve of the season and outrighted back to Triple A. A free agent after a season entirely with the Las Vegas 51s, he made a homecoming to the BoSox organization, particularly Pawtucket, where he spent the entirety of 2019, batting .216 with 18 homers and 50 RBI.