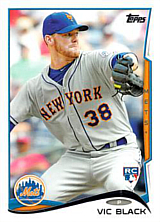 Vic Black was a supplemental first round pick in the 2009 amateur draft who reached the majors in 2013. He pitched parts of two seasons with the Pittsburgh Pirates and New York Mets and was able to hit 100 mph on the radar gun.

Black was chosen by the New York Mets in the 41st round of the 2006 amateur draft out of high school but did not sign. He was 5-5 with a 4.86 ERA and a save as a college freshman at Dallas Baptist University, fanning 91 but walking 57 in 87 innings. As a sophomore, Vic fell to 1-6, 4.97 while the rest of the staff was 36-13. As a junior, he had a 6-4, 4.16 record with 99 strikeouts in 88 2/3 innings. The Pittsburgh Pirates took him with the 49th (and last) pick of the first round of the 2009 draft, a compensation choice for their failing to sign Tanner Scheppers a year prior. It was the highest a Dallas Baptist University player had been picked; the old record had been in the 4th round. Black was signed by scout Mike Leuzinger and began his pro career that summer.

Black made his professional debut on June 30, 2009, tossing a scoreless inning and fanning two against the Mahoning Valley Scrappers for the State College Spikes. He went 1-2 with a 3.45 ERA and 33 strikeouts in 31 1/3 innings for the season. Baseball America rated him the New York-Penn League's #6 prospect, between Jason Kipnis and Ramon Benjamin. He missed almost all of 2010 with shoulder and biceps injuries, only making two starts for the West Virginia Power (5 ER, 5/8 BB/K in 4 2/3 innings). Vic suffered tendonitis in his shoulder in 2011 and pitched 27 games for the Power (2-1, 1 save, 5.28 in 22 games) and Bradenton Marauders (1-0, 4.05 in 5 games). Finally healthy again in 2012, Black had a stellar season for the Altoona Curve (2-3, 13 saves, 1.65 ERA, .189 opponent average). Among Eastern League relievers, he had the lowest opponent average and highest strikeout rate (12.75 K/9). He also led in appearances (51, one more than Preston Guilmet and Pat McCoy) and tied Daryl Maday for 7th in saves. Guilmet beat him out as the EL's All-Star reliever. In the Pirates chain, only Tim Wood (54) pitched more games. In the Arizona Fall League, he was 1-1 with a save but a 11.81 ERA and 11 walks in 10 2/3 innings for the Scottsdale Scorpions, the worst ERA on the staff.

Black began 2013 on a strong note for the Indianapolis Indians (1-2, 15 saves, 2.31, 51 strikeouts, 20 hits in 35 innings) and was third in the International League in saves (after Jairo Asencio and Guilmet) when he was called up to Pittsburgh due to an injury to closer Jason Grilli. He debuted in a wild 9-7 loss to the Washington Nationals on July 25th. Relieving Vin Mazzaro with a 7-3 deficit, one on and two out in the bottom of the 8th, he walked Jayson Werth then struck out Ian Desmond. Neil Walker batted for Black to open the 9th. He allowed two runs in four innings for the Bucs, then was back in the minors (5-3, 17 saves, 2.51 ERA, 63 strikeouts, 28 hits in 46 2/3 innings overall for Indianapolis). At the trading deadline that year, he was packaged as a player to be named later with Dilson Herrera in a deal to the New York Mets for Marlon Byrd and John Buck. Black joined the Mets as a September call-up and made 15 appearances on the year. In 13 innings, he struck out 12 batters and earned 3 pitcher wins while recording a 3.46 ERA and 1.18 WHIP. The following year, 2014, he struggled to avoid injury, missing time at both the big league and Triple A level with a pinched nerve in his neck, a herniated disk in his neck and a season-ending shoulder strain. In between the maladies, he made 42 big league appearances and fashioned a 2.60 ERA in 34 2/3 innings, striking out 32. It would be his last big league action. He toured the Mets minor league chain in 2015, with a rough 5.94 ERA spread over three stops and was outrighted off the big league 40-man roster in September. He was last spotted in organized ball pitching in the minors with the San Francisco Giants in 2017. Black joined the New Jersey Jackals of the independent Canadian-American Association in 2018 to complete his playing career.

In 2020 the Pittsburgh Pirates hired Black to be the assistant pitching coach for the GCL Pirates before the COVID-19 pandemic caused the minor league season to be cancelled. He was then a coach for the FCL Pirates Gold in 2021.