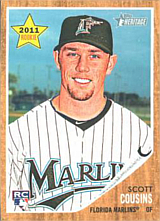 "If you go in first feet and slide they punish you. If you hit them, you punish them and you punish yourself, but you have a chance of that ball coming out." - Scott Cousins, on his famous slide, 2011 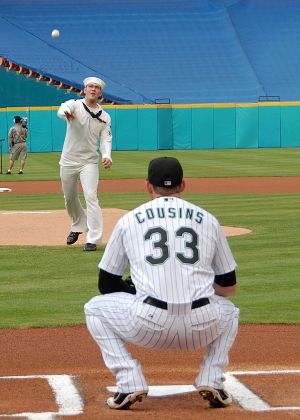 Scott Cousins played 135 games over four seasons. In 2011, he was briefly public enemy number one for a hard (yet legal) slide into golden boy catcher Buster Posey of the San Francisco Giants, ending Posey's season.

Cousins, himself a cousin of NFL player Travis Hall, was twice all-league in high school; he also starred in basketball, setting a school record for three-pointers. His sophomore season of college, Cousins hit .309 with 7 homers and 13 steals for San Francisco. On the mound, he was 8-5 with a 2.74 ERA, finishing second in the WCC in ERA behind teammate Nick Pereira. He was named All-WCC as a utility man. In 2006, the junior batted .343/.418/.500 with 21 steals in 27 tries and 53 runs scored in 61 games. He fell to 4-3, 4.02 on the mound, as Aaron Poreda replaced Pereira as the ace, but his fastball was still timed in the low 90s. Cousins was one steal shy of the WCC lead and again the All-Conference utility man. For his two-way work, he was named WCC Player of the Year, beating out Poreda, Brett Hunter and Daniel Nava among others.

On May 25, 2011, in a game against the San Francisco Giants, Scott occupied third base with one out in the top of the ninth inning. When Emilio Bonifacio flew out to Nate Schierholtz for the second out, Scott raced home, colliding with Buster Posey in a play at the plate, breaking Posey's leg and dislocating his ankle and ending his season. The run propelled the Marlins to a 7-6 win and triggered a non-stop barrage of outrage. The Giants thought that Cousins' slide had been unnecessarily violent, as Posey was not blocking the plate on the play. Giants GM Brian Sabean went overboard, calling for Cousins to be banned from baseball while threatening physical retaliation: "If I never hear from Cousins again or he never plays another game in the big leagues, I think we'll all be happy... (Cousins) chose to be a hero in my mind, and if that's his flash of fame, that's as good as it's going to get, pal. We'll have a long memory. You can't be that out-and-out overly aggressive. I'll put it as politically as I can state it: There's no love lost and there shouldn't be." The injury set off a debate on how to better protect catchers, with a number of voices, such as Bruce Bochy's, raised in favor of punishing players who deliberately run into an opponent. In 2014, a rule was passed to eradicate these collisions.

By then, Scott's big league career was over. Amid all the controversy, he only played 48 games, just 14 after the collision, hitting .135/.224/.212 in only 52 at bats. He went down to the minors on June 12, resurfacing on June 15, 2012 for the now Miami Marlins. Things did not get any better; though he played a career high 53 games, he hit only .163/.200/.267 in 86 at bats. He danced the DFA limbo in the ensuing offseason, playing only seven more games in the bigs for the 2013 Los Angeles Angels, striking out three times in four at bats. He contemplated a comeback as a pitcher, retiring during a 2015 season spent with the Atlantic League's Somerset Patriots. In 2016, he accepted a job as a Scottsdale-based scout with the Oakland A's.