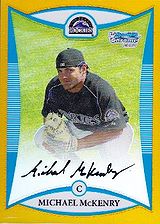 Michael McKenry made his major league debut with the Colorado Rockies in 2010.

McKenry hit .384 with 18 homers as a high school sophomore, .407 with 14 home runs as a junior and .455 with 11 circuit clouts as a senior. He finished second all-time in Tennessee high school history in career homers and RBI. He was All-State each of his last three years. As a senior, he led his club to the #2 seed in the nation.

As a college freshman at Middle Tennessee State University, McKenry struggled, batting .167/.267/.299. He improved as a sophomore, batting .328/.409/.617 and made All-Sun Belt Conference. The progress continued into his junior year when he hit .390/.494/.676 with 58 RBI in 55 games. He was All-Conference once again and was named the All-American Division I catcher by the American Baseball Coaches Association and was picked third-team by Collegiate Baseball. He was the second first-team All-American in school history, following Dewon Brazelton. Among those he beat out was Matt Wieters.

McKenry was picked in the 7th round of the 2006 amateur draft by the Colorado Rockies and signed by scout Scott Corman. He hit .216/.303/.339 for the Tri-City Dust Devils that season, beginning his professional career slowly just like his college career. He made major strides in 2007. With the Asheville Tourists, he batted .287/.392/.539 with 35 doubles, 22 home runs and 90 RBI. He was 4th in the South Atlantic League in slugging and led Rockies prospects in homers and slugging. He was named to the SAL All-Star team at catcher. Baseball America rated him as the best defensive catcher in Colorado's chain.

Assigned to the Waikiki Beach Boys that winter, McKenry hit .281/.358/? and threw out 16 of 34 attempted base-stealers, leading the Hawaii Winter League in caught stealing percentage. He was named to the All-Star team at catcher, beating out Wieters.

In 2008, Michael produced at a .256/.360/.468 rate for the Modesto Nuts with 18 home runs and 75 RBI. Baseball America named him the #9 prospect in the Rockies system and the best defensive catcher. He gunned down an impressive 45 of 85 base-stealers, for a 47% success rate. McKenry raised his average and OBP in 2009 with AA Tulsa while showing less power. He was initially listed on the USA's roster for the 2009 Baseball World Cup but a freak injury caused him to be replaced by Lucas May right before the tournament began. The day before he was set to leave, he was hit in the ear on a backswing. The blow caused a concussion and required stitches in his ear. He also had a negative reaction to the local anesthesia.

McKenry made his major league debut for the Colorado Rockies late in the 2010 season, going 0 for 8 in 6 games. At the end of spring training the following year, he was traded to the Boston Red Sox and began the 2011 season with the Pawtucket Red Sox (.274/.369/.421 in 29 G), before being sold to the Pittsburgh Pirates on June 12th. He was called up to Pittsburgh the next day and became the Bucs' regular catcher (Ryan Doumit and Chris Snyder were both out with injuries and several other substitutes had not panned out), his arrival coinciding to his team's push towards the top of the NL Central standings. On July 26th, he was at the center of one of the most controversial plays of the season. In the 19th inning of a 3-3 game against the Atlanta Braves, he caught a throw from 3B Pedro Alvarez well ahead of baserunner Julio Lugo, who was trying to score the winning run from third base. He applied a quick swipe tag on Lugo, hoping to then relay to first base to complete an inning-ending double play. However, home plate umpire Jerry Meals ruled that Lugo had escaped the tag and had scored the winning run. An incredulous McKenry and an irate Clint Hurdle disputed the call to no avail, and the Braves walked off with a 4-3 win. The Pirates filed a formal protest after the game. Meals then admitted the next day, after watching video replays, that he had blown the call, and MLB Vice-President Joe Torre did as well, but the call was allowed to stand as part of the "human element" of the game. That memorable game was a turning point for the Pirates, as they quickly fell out of the NL Central race and below .500 after the heart-breaking loss. McKenry ended up playing 58 games that season, with a .222/.276/.332 batting line, 12 doubles and 2 homers.

Back with the Pirates as a back-up to newly-signed Rod Barajas (Pittsburgh had let both Doumit and Snyder leave as free agents) in 2012, McKenry had the honor of breaking Aroldis Chapman's string of 24 scoreless appearances from the start of the season, He doubled in a run off the Cuban fireballer in the 10th inning of a game on June 7th, leading the Pirates to a 5-4 win over the Cincinnati Reds. Chapman had not even allowed a hit since May 17th before Clint Barmes doubled right ahead of McKenry. He had driven in another key run earlier in that game with a sacrifice fly in the 7th. he hit .233 in 88 games for the Pirates that season, with career highs of 12 homers and 39 RBIs. In 2013, the Bucs signed Russell Martin to be their starting catcher, and this relegated Michael to a back-up role. He had only 115 at-bats in 41 games, hitting .217 with 3 homers and 14 RBIs. The Pirates reached the postseason for the first time since 1992, but he was not used in those games.

McKenry returned to the Rockies as a free agent before the 2014 season, which he spent as the back-up to Wilin Rosario. He hit .315 in 58 games, with 9 doubles, 8 homers and 22 RBIs for an excellent OPS+ of 138. In 2015, however, he slumped to .205 in 58 games, getting only 127 at-bats with Nick Hundley having taken over as the starting catcher. He hit 4 homers and drove in 17 runs, continuing to provide decent production for a substitute backstop. His season ended in late August when he had to undergo knee surgery. After the season, on December 30th, he moved to the Texas Rangers as a free agent.

The Tampa Bay Rays signed him for 2017 and he spent all year with the Durham Bulls, batting only .209/.338/.324 in 74 games, playing about as much left field as catcher. It was his last pro season. In 2019, he became a broadcaster, doing pre- and post- game shows for the Bucs. He moved into game action in 2020 as one of three players chosen to replace Steve Blass in the booth (Kevin Young and Matt Capps were the others).