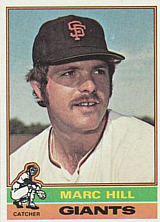 Marc Hill's father, Ed Hill, was a pitcher in the St. Louis Browns farm system and his mother was a star softball pitcher; naturally Hill grew up in a sports-loving environment. He was all-Missouri in basketball and baseball, but chose the latter because 6'3" white guys who can't jump or run weren't in demand in basketball.

Hill made his pro debut in the pitching-dominated Gulf Coast League. He hit .192 and made the All-Star team. In 1972, he met his wife Cheri while he was playing for St. Petersburg - Cheri's kid brother asked her what her favorite number was before the game and then told Marc he was wearing that number (9). They married in 1973 and Hill made his big-league debut, backing up Ted Simmons and Tim McCarver. He caught a two-hit shutout in that brief September trial and threw out the first runner who attempted to steal against him, Mike Schmidt. Hill was known for his strong arm and defensive skills.

Hill was traded to the San Francisco Giants in 1975 and was given the locker next to Willie McCovey. Hill got lots of free shoes and other things from McCovey, as well as a nickname. McCovey reasoned that no one had heard of Marc Hill, but they'd heard of Boot Hill and Bunker Hill, so McCovey merged the two into "Booter Hill." In 1976, Hill broke Randy Jones' then-National League-record run of 68 consecutive innings without a walk.

Hill saw his only regular playing time in the majors in 1977 and 1978 and did okay, posting an OPS+ in the mid-80s each year. In 1978, he stole his only base (in 8 tries) when Johnnie LeMaster botched a hit-and-run. Hill later wrote that this was a very ambitious thing for the manager to attempt with LeMaster's hitting skill and Hill's speed. Giants owner Bob Lurie later arranged for Lou Brock to present Hill with the base mounted on a plaque reading "First Stolen Base in the Big Leagues."

Hill considered retirement after the 1980 season when he lost his enthusiasm for baseball. When no one signed him as a free agent, he suddenly wanted to play again. Tony LaRussa, managing the Chicago White Sox, invited Hill to spring training. A couple other teams offered contracts but as Chicago only had one catcher, Jim Essian, Hill accepted the offer from the Pale Hose. Chicago promptly went and signed Hall of Famer Carlton Fisk. Hill bid LaRussa good bye the day before camp ended, before LaRussa told him they would use three catchers that year and that he wasn't done yet. Hill was hardly used in 1981, batting 0 for 6. He wrote "I did hit four balls hard, however. I must have, because at the end of the year the Sox gave me a five thousand dollar raise for the 1982 season... if they gave me a five thousand dollar raise for going oh-for-6 what would they have done if I had been oh-for-20? If I had had fifty at bats that year, I could've been rich." He did go 3 for 7 in two games in the minor leagues in August that season.

In 1983, Hill and Fisk combined to hit 27 homers, a record for White Sox catchers; Hill 1, Fisk 26. In a game in May at Yankee Stadium, the slow-footed Hill scored from second base on a Greg Walker fly ball - the runner from first took third on the play. Hill was often mistaken for fellow Sox LaMarr Hoyt and Greg Luzinski - he said he signed many autographs as "LaMarr Hoyt" in those situations in 1983. The White Sox press guide later listed the following as one of Hill's career highlights: "Hill did not appear in the 1983 playoffs against Baltimore."

Hill was a prankster, giving the hotfoot or putting shaving cream in hats. He argued this is a job required for backup players. He also says he was a good cheerleader from the bench.

After being released in May 1986, Hill served as an unofficial coach with the 1986 White Sox. The following year the White Sox hired him to manage for one season in the Florida State League. Hill was the Houston Astros bullpen coach in 1988. He next joined the New York Yankees organization as a minor league catching instructor in 1989, their bullpen catcher (hired June 6) in 1990, and bullpen coach in 1991.

"Booter" managed several years in the Seattle Mariners and Pittsburgh Pirates minor league systems. He guided the Peninsula Pilots to the Carolina League title in 1992. On June 19, 1997 the Pirates moved him from a managerial role and named him the Pirates' minor league catching instructor. Hill kept this job through the end of the 2002 season when the Pirates made several personnel changes to their player development program.

He briefly returned to managing with the Frontier League's River City Rascals for the first half of the 2003 season.

Fall of the Roman Umpire by Ron Luciano and David Fisher