Note:' This page is for 1970s outfielder Lyman Bostock; for his father, who played in the 1940s, click here. 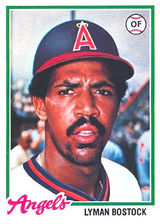 "We have been deprived of a great player, a great friend, and an unmatched spirit has left the Angel clubhouse." - Ken Brett at Bostock's funeral

Lyman Bostock was a successful young outfielder whose life was cut short by tragedy. His four seasons in major league baseball bear similarities to the first four years of Hall of Famer Kirby Puckett's career, another Minnesota Twins player whose life ended prematurely. Bostock was the son of Lyman Bostock, Sr., who played in the Negro Leagues with the Brooklyn Royal Giants in 1938 and joined the Birmingham Black Barons in 1940.

He made his major league debut with the Minnesota Twins at the start of the 1975 season. He was the same age as teammate Bert Blyleven, who would go on to play through 1992. In his first season, Bostock appeared in 98 games and hit .282 in a league with an overall batting average of .258. He was sent down to Triple A for six weeks in May and June after hitting .219 in April. He was hitting below .200 as late of July 18th, but then hit .323 over the second half and never looked back. Bostock hit over .320 in 1976 and 1977. He continued to improve as a player, hitting 9 triples and stealing 12 bases in 1976, while hitting 12 triples and stealing 16 bases as he moved his average up to .336 in 1977. His homer total of 14 in 1977 was by far his best. Lyman was likely spurred to greater heights by teammate Rod Carew, who hit .388 in 1977 and flirted with .400 much of the season until the end. A free agent after 1977, he signed with the California Angels for the 1978 season. Bostock did not hit for power in 1978, but his batting average was .296. He had the highest average on the team, playing alongside slugger Don Baylor, who hit 34 home runs, 21-year-old rookie Carney Lansford and 39-year-old veteran Ron Fairly, who retired after that season. Nolan Ryan was a pitcher on the team.

Bostock was murdered in Gary, IN on September 23, 1978, while visiting his uncle. Bostock and his uncle had dinner, then went to visit a childhood friend, Joan Hawkins, who was at home with her sister, Barbara Smith. The men set out to drop the women off at a cousin's house. Barbara's estranged husband, Leonard Smith, followed the car to the intersection of Fifth and Jackson where he fired a shotgun into the car intended for Barbara. Bostock, sitting in the back seat next to her, was hit (although Bostock was shot late on September 23rd, he died early on 24th. Source: the author, Frank Russo of SABR checked the death certificate, medical records and police report). Smith was acquitted by reason of insanity and spent six months in a mental institution before his release. Thirty years later, he still lived in the same apartment in which he was arrested, dying in 2010 of natural causes at 64.

After Bostock was murdered, he was still listed in the top ten hitters in the league each day in the newspapers until nearly the last day. At the end of the season, it turned out the 10th hitter in the league, Thurman Munson, batted .297. Munson's life also ended before his time. Despite the shortened season, Bostock still finished 4th in the league in singles and 6th in the league in intentional walks. Lyman was deprived of playing with the 1979 Angels, who won the division for the first time in franchise history.

None of the ten most similar players to Bostock, using the similarity scores method, seem suitable, given the sudden ending to Bostock's career. Instead, it seems more appropriate to look at the first few seasons of two Hall of Fame careers - those of Kirby Puckett and Ross Youngs, which were fairly similar - to see what might have happened to Lyman Bostock had not his life been so cruelly shortened. Bostock's lifetime batting average, .311, is the same as that of Jackie Robinson.