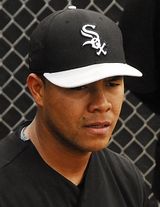 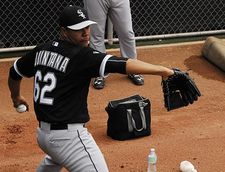 José Quintana made his major league debut with the Chicago White Sox in 2012.

In 2011, Quintana was 10-2 with a 2.91 ERA for the Tampa Yankees, being used as both as a starter and reliever. Had he qualified, he would have been 5th in the Florida State League in ERA. Let go by the Yankees, he signed with the Chicago White Sox on the recommendation of Daraka Shaheed and Joe Siers. He began 2012 with the Birmingham Barons and was 1-2 with a 3.06 ERA after six starts. He was called up to the big leagues despite only those six games above A ball; he was called up at the same time as Eric Stults; Dylan Axelrod was sent down and Chicago's roster expanded to 26 for the first time due to the taxi squad rule.

On March 18, 2014, Quintana had one of the worst starts ever seen when he faced the Oakland Athletics in a Cactus League game. He faced nine batters, of which 7 had base hits and 2 walked, before giving way to reliever Deunte Heath with nobody out. The hits included a long homer by Jed Lowrie and a triple by Sam Fuld, the ninth man to come to the plate. All nine of the batters he faced eventually scored. As a comparison, no starter has ever given up 9 runs without retiring a single batter in a major league game, and the dubious feat had only been accomplished once, in relief, by Hank Borowy of the Detroit Tigers in 1951. Luckily for Jose, however, spring training statistics do not count.

On July 24, 2015, he pitched his first career shutout in blanking the Cleveland Indians, 6-0. He went 9-10 in 32 starts that season, in spite of pitching very well, as attested by his ERA of 3.36, an ERA+ of 116. He logged over 200 innings for the third straight year, but had been unable to win in double figures during that stretch in spite of posting very good ERAs each year. Bill James had once posited that run support evens out in the long run if someone gets to stick around long enough, but Quintana seemed to be trying to disprove that axiom, being among the worst-supported pitchers in the majors year after year.

He again pitched very well over the first three months of the 2016 season, but after starting off well, being 5-1, 1.38 after 7 starts, the Sox scored 1 or 2 runs every time in his next 7 starts, except for one game in which they scored 3 (but lost anyway). He had a no-decision when Chicago defeated the Boston Red Sox, 8-6, on June 22nd, then his teammates were shut out in his next start. That made him 0-7 for that stretch of nine starts, even though he had continued to pitch well. He finally broke the jinx on July 3rd, when he defeated the Houston Astros, 4-1, pitching 7 solid innings. In spite of these difficulties, he was named to the All-Star team in recognition of the fact he was pitching extremely well even if his run support left a lot to be desired. He finished the season with a record of 13-12, 3.20 in 32 starts, topping 200 innings for the fourth straight years.

There was a lot of trade interest around Quintana following his very good 2016 season, especially after the White Sox traded ace Chris Sale, indicating that they were serious about re-building. But a trade did not happen and he began the 2017 season back with the Pale Hose after pitching for Colombia in the 2017 World Baseball Classic. In the first half of the season he went 4-8, 4.49 in 18 starts, with trade rumors continuing to swirl around his name. On July 13th, the White Sox did trade him, to the Chicago Cubs in return for four prospects: Eloy Jimenez, Dylan Cease, Matt Rose, and Bryant Flete. He was outstanding in his first start for the Cubs on July 16th, allowing no runs over seven innings while striking out 12, walking none and giving up only 3 hits. He was credited with an 8-0 win over the Baltimore Orioles. In his second start, on July 23rd, he defeated the St. Louis Cardinals, 5-3, at Wrigley Field to allow the Cubs to catch the Milwaukee Brewers in first place, putting them there for the first time since June 6th. On September 24th, he pitched a great game against the Brewers, a complete-game three-hit 5-0 shutout that extended the Cubs' lead over the second-place Brewers to 5 1/2 games and bringing the magic number down to two. He finished the season at 7-3, 3.74 in 14 starts for the Cubs, for an overall record of 11-11, 4.15. He made his postseason debut in the Division Series against the Washington Nationals, giving up just one unearned run in 5 2/3 innings in a Game 3 start, ending with a no-decision. He then made a relief appearance in a key situation in the decisive Game 5 on October 12th, getting two outs in the 7th inning after Carl Edwards had walked the lead-off batter, before giving the ball to Wade Davis who pitched the final 2 1/3 innings to preserve Chicago's 9-8 win. He then made two starts in the NLCS against the Los Angeles Dodgers. The Cubs lost both starts, although he did alright in Game 1, allowing 2 runs in 5 innings, but he was rocked in Game 5, with 6 runs in 2 innings as Chicago lost the game by an 11-1 score to be eliminated from the postseason.

In 2018, he had a strong season, going 13-11, 4.03 in 32 starts and 174 1/3 innings, striking out 158 opponents. The Cubs' season ended in disappointment however, as they went from being a win away from claiming the top seed in the playoffs, to being eliminated by the Colorado Rockies in the Wild Card Game. He did start the one-game playoff against the Milwaukee Brewers at home on October 1st and pitched well, allowing 1 run in 5 innings. He left with the score tied, but the Cubs lost the game, 3-1, and then the Wild Card Game in extra innings the next day to see their season come to an early and disappointing end. In 2019, he had another good season, this time finishing at 13-9, 4.68 in 32 games. However, there were a couple of red flags as his ERA+ was worse than the league average for the first time of his career, and his 171 innings were his lowest total since his rookie season in 2012, when he had made just 22 starts for the White Sox.

Just before training camp was about to resume after an interruption of over three months in July 2020, he was sidelined by a freak injury when he lacerated the thumb on his pitching hand while washing dishes at home in Miami, FL. He required micro-surgery and was to miss a minimum of two weeks, making it likely he would miss the start of the season. In the end, he only made his first appearance on August 25th, and pitched just 4 games that season, with only one start. He had no decisions and a 4.50 ERA in just 10 innings. The Cubs still won a division title in his absence, but he did not see any action in the postseason either as they were swept in two games by the Miami Marlins in the Wild Card Series. He became a free agent after the season and on January 19, 2021 signed a one-year deal with the Los Angeles Angels for $8 million. In 24 games for L.A., including 10 starts, he was 0-3, 6.75, then was claimed off waivers by the San Francisco Giants on [[August 30]th. He pitched 5 more time for the 107-win Giants, all in reliuef, with no decisions and a 4.66 ERA. Once again, he was not on the postseason roster.

Following the 2021 season, he signed a free agent contrat with the Pittsburgh Pirates for the 2022 season. He made the team's starting rotation and was pitching well during the first few weeks of the season, but was just 0-1 in his first five starts. Finally, on May 9th, he received credit for a 5-1 win over the Los Angeles Dodgers in which he gave up no runs on 2 hits in 6 innings. Not only was it his first win since 2019, but it was also the first by any Pirates starting pitcher in their 28th game of the season. This broke the record set by the 1988 Baltimore Orioles, whose first win by a starter had gone to Jay Tibbs in the 22nd game - after 21 straight losses. In contrast, the Pirates were playing pretty well, as the win improved their record to 12-16, and Quintana's ERA stood at a very good 2.70 at the end of the outing.