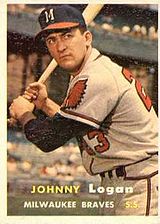 Scrappy Johnny Logan never backed down from a fight and supposedly never lost one. His quick hands compensated for an average arm at shortstop and were an asset when, outraged by beanballs, he took on opponents as big as Bob Gibson and Don Drysdale. The leadership role he played on the great Braves teams of the 1950's with his fiery personality was arguably an integral part of the team's success.

On August 25, 2005, Logan and Bob Uecker were honored at Milwaukee's Miller Park. Logan was cited as part of the Turn Back The Clock celebration before the Milwaukee Brewers took on the Atlanta Braves.

After his playing days, Logan remained in Milwaukee and spent time as a broadcaster, ran for sheriff and was engaged in a variety of other endeavors in and out of baseball. He has scouted for the Brewers, primarily in the state of Wisconsin, for quite a few years and knows the talent there. He was one of the founders and president of the Milwaukee Braves Historical Association.

He had black hair and blue eyes, his ancestry was Russian and his principal hobby was golf. He celebrated his 79th birthday on 23 March 2006 at his current residence in Milwaukee, WI.