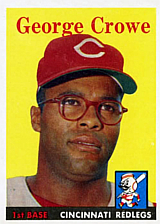 "In another era Crowe might well have been a manager, or even a general manager, and one of his proteges, Bill White, went on to become president of the National League. No one was going to abuse anyone or bully anyone on a team as long as George Crowe was there. And no one was going to toss racial epithets around lightly. He became, not surprisingly, the self-appointed judge of the team's kangaroo court, a job for which he seemed to have been ordained at birth. He loved setting fines on the players for their minor mistakes -- missing a sign, or failing to move a runner ahead with either no outs or one out -- and his commentary was a far more important part of the team's byplay than the fines collected. Almost unconsciously, he merged the culture of the two races, for he was a black man who had lived for a long time in a black man's world, and when he came to the white man's world he brought with him a distinctly black sense of dignity and pride." - David Halberstam, October 1964

George Crowe was one of the most respected big leaguers in the early days of integration. Known as "Big Daddy" for his role in mentoring many of the African-American players now able to play big league ball, Crowe did not get a shot at The Show until he was 30, making an All-Star team and enjoying a 30 home run season.

As a high schooler, it was basketball where drew George rave reviews. He won the inaugural "Mr. Basketball" honors in Indiana as a high school senior at Franklin High in 1939. He starred in both baseball and basketball at Indiana Central College in the 1940s, enlisting in the Army upon graduation and spending time in Asia. In 1946, he was a part of a touring basketball team, the Los Angeles Red Devils, teaming up with Irv Noren and the legendary Jackie Robinson on the parquet floors. Crowe joined the New York Rens when the Red Devils busted and was part of the first all-black team to play at the legendary Madison Square Garden. In 1948, the Rens came up four points short in the championship of the World Professional Basketball Tournament, falling 75-71 to George Mikan and the Minneapolis Lakers.

With pro basketball on shakier ground than pro baseball, Crowe was lured into the fold of the New York Black Yankees in the Negro National League during the 1947 season. Effa Manley personally recommended George to the Boston Braves prior to the 1949 season, with the NNL disbanding, and George was off and running in baseball, never to play the shooty hoops again. To look like a better prospect, George shaved two years off his age, telling the Braves he was 26 instead of his actual 28.

He had seen the last of the minors for a while. After a .281/.374/.495 season with 15 home runs in 1955, he was peddled to the Cincinnati Redlegs before the 1956 season. George, acquired as insurance for Ted Kluszewski, did not light the world on fire in his first season (.250/.312/.486 with 10 bombs in 77 games) but did become a valuable mentor, taking Frank Robinson, Vada Pinson and Brooks Lawrence under his wing, among others. When Klu was unable to answer the bell in 1957, George filled the gap splendidly, hitting .271/.314/.504 with 31 home runs and 92 RBI. He was the only member of the club to not be voted into the All-Star Game as a starter thanks to Cincinnati fans stuffing the ballot box; later, Ford Frick would drop Crowe and his outfield mates (Gus Bell and Wally Post) to pad the starting outfield with Hank Aaron, Willie Mays and Stan Musial.

On August 14, 1957, Crowe hurt his knee and heroically played on one leg down the stretch. Though he did not know it at the time, it would be the beginning of the end. He was rewarded with an All-Star berth in 1958 as part of a platoon with new first base mate Steve Bilko but his production had tapered off (.275/.348/.400, 7 home runs in 111 games). He did, interestingly enough, play part of a June 14 game against the Chicago Cubs as a left-handed second baseman, taking part in a double play ball courtesy of the bat of pitcher John Briggs. He found a new lease on life as a pinch hitter in 1959, moving to the St. Louis Cardinals the prior Halloween in a six player swap. He batted .301/.330/.592 with 8 home runs in his new role, contributing 4 more home runs but a .236/.278/.444 line in 1960. After going 1-for-7 to start 1961, he moved back to the minors and finished his career as a player-coach. Upon his retirement, he had established a since-broken record by belting 14 pinch home runs in his career.

Crowe was the first Indiana-born African American to play in the majors. He was inducted into the Indiana Baseball Hall of Fame in 2004 as well as the Indiana Basketball Hall of Fame. He lived mostly in seclusion after leaving the game, spending nearly thirty years living in the mountains. He died at 89 in 2011.