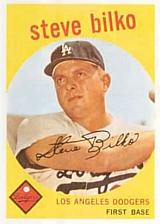 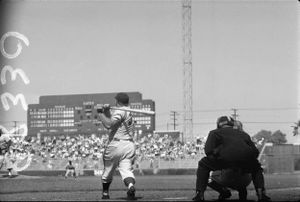 "No doubt, he was the most popular player in L.A. history in any sport up to the time the Big Leagues got here." - Dick Beverage, president of the PCL Historical Society

Steve Bilko was a slugging first baseman who played parts of ten seasons in the majors but is best remembered for being a huge slugging star in the minors, twice hitting over 50 home runs.

Bilko began his pro career in the St. Louis Cardinals organization. From 1949 to 1952, he was primarily with the Rochester Red Wings, seeing limited playing time in the majors each year as well. With Rochester in 1949, he .310 with 34 homers and drove in a league best 125 RBI. He became the Cardinals' regular first baseman in 1953 and hit .251 with 21 home runs and 84 RBI but struck out 125 times. He was sent to the Chicago Cubs in 1954 before returning to the minors for several years.

With the still minor league Los Angeles Angels, Steve led the Pacific Coast League in home runs each year from 1955 to 1957. In 1955, he hit .328 with 37 homers and 124 RBI. The next year, he did even better, winning the PCL Triple Crown with an extraordinary .360-55-164 line. In 1957, he batted .300 with 56 home runs and 140 RBI. Following stints in the majors with the Cincinnati Reds, Los Angeles Dodgers, and Detroit Tigers, Bilko was selected by the now big league Los Angeles Angels in the expansion draft in 1960. He hit 20 home runs and slugged .544 in 294 at bats in 1961 and succeeded in putting butts in the seats. After playing for the Angels again in 1962, he returned to the Rochester Red Wings for 1963, his last year in pro ball. When his minor league career ended in 1963, Bilko had a .312 career average with 313 home runs. In 2003, he was elected to the Pacific Coast League Hall of Fame, and in 2004, he was inducted into the Rochester Red Wings Hall of Fame. In 2015, he became a member of the Baseball Reliquary's Shrine of the Eternals.

During his career, his listed playing weight of 230 pounds was the highest of any major leaguer, until Frank Howard came along. His actual playing weight was higher, probably around 255, and this was one of a myriad of silly reasons scouts did not think he could succeed in the majors in spite of his major league pedigree.

The legendary The Phil Silvers Show made its debut on television in 1955, and the titular star of the series played a character named Sergeant Bilko. Nat Hiken, the series creator, named Phil's character after, you guessed it, Steve Bilko. Bilko and Silvers were photographed together in at least one publicity shoot.

"Headlines every day. I remember one day I pitched against Hollywood and shut them out. He didn't do anything. The next day, the headline was, 'Bilko fails to get a hit.' - Tommy Lasorda