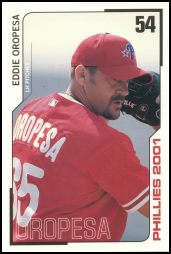 Eddie Oropesa pitched for five years in the Cuban Serie Nacional, 12 years in the USA, one year in Mexico and has taken his arm to the Netherlands for 2007.

His career unimpressive, he was a member of the Cuban national team that won the 1993 World University Games. While at Sal Maglie Field in Niagara Falls, NY, Oropesa jumped over a fence and got into a car with a relative to go to Miami, FL with the hopes of achieving politicial asylm. A couple days prior, teammate Rey Ordonez had also "jumped ship".

Signed by the St. Paul Saints, Eddie went 3-1 with a 1.93 ERA, allowing only 6 hits in 19 IP while striking out 19, glad to be facing independent league ball after all those years against tough Cuban competition. He was St. Paul's most successful hurler that year, outperforming the likes of Mike Mimbs and Paul Marak.

Oropesa was picked by the Los Angeles Dodgers in the 14th round of the 1994 amateur draft. Assigned to the Vero Beach Dodgers, the submariner had an effective 4-3, 2.13 record in 19 games. Had he qualified, he would have ranked second in the Florida State League in ERA.

During the 1994-1995 strike, Oropesa served as a replacement player for the Dodgers in spring training, joining Matt Herges in the bullpen.

Oropesa pitched at three levels in 1995. With Vero Beach, he was 3-1 with one save and a 3.81 ERA in 19 appearances. He saved his only game for the San Bernardino Stampede, pitching a hitless inning. With the San Antonio Missions, he had a 1-1 record in 16 games, with a 3.12 ERA and one save.

Returning to San Bernardino (now the San Bernardino Spirit) in 1996, Oropesa went 11-6 with one save and a 3.34 ERA, tying Dennys Reyes for the team lead in wins. He struck out 133 in 156 1/3 IP, walking 77 and allowing 133 hits. He finished second in the California League in ERA behind Darin Blood.

The San Francisco Giants chose Oropesa in the minor league phase of the 1996 Rule V Draft that winter. In 1997, Eddie pitched 43 games for the Shreveport Captains, with a 7-7, 3.92 record. He led the Texas League with six balks but finished 5th in the high-scoring TL in ERA.

At age 26, Oropesa returned to Shreveport, slumping to 7-11 despite a 3.78 ERA. He moved up to fourth in the Texas League in ERA. He also spent part of the year with the Chinese Professional Baseball League, with a 0-2 record, one save and a 6.28 ERA in 8 games for the President Lions.

He finally made it to AAA in 1999, going 6-5 with a 4.85 ERA in 21 games (18 starts) for the Fresno Grizzlies. He made two rehab appearances with the Bakersfield Blaze, winning both. He tied for the Pacific Coast League in balks (4, even with Robinson Checo). He also appeared in the Mexican League, going 0-4 with a 7.06 ERA for the Reynosa Broncos.

Signed by the Philadelphia Phillies in the off-season, Oropesa opened the year with the major league team after 13 years in baseball. His first game gave a taste of the type of action he would see. On April 2, he relieved Ricky Bottalico and got Cliff Floyd to foul out. He was then replaced by Wayne Gomes, having thrown two pitches. Overall, Oropesa made 30 appearances, but only lasted 19 innings. The LOOGY battled control problems, walking 17, and went 1-0 with a 4.74 ERA. He made a couple appearances in the minors - with the Scranton/Wilkes-Barre Red Barons, Edilberto went 1-1 with a 2.35 ERA in 14 games. He also threw two scoreless innings for the Clearwater Phillies. Oropesa was the most-used left-handed relief pitcher on the 2001 Phillies.

That effort got him signed again, this time by the Baltimore Orioles. He pitched 5 late-season games for the Ottawa Lynx, allowing no runs in 6 IP with 3 hits, 2 walks and 5 strikeouts.

In 2006, Eddie pitched four games back in the Northern League after a 12-year absence. The remnant from the early days of the independent leagues pitched four times, going 2-1 with a 4.43 ERA.

Oropesa was expected to return to Sparta/Feyenoord for 2008 but family circumstances prevented him from playing in the Netherlands; he helped arrange for former Mets farmhand Arístides Almenar to replace him on the roster.

Oropesa was a translator with the Los Angeles Dodgers for Yasiel Puig in 2013-2014 then became a coach with the Mobile BayBears in 2016. Moving to the Arizona Diamondbacks' organization he was a coach for the Visalia Rawhide in 2017 and Missoula Osprey in 2018.