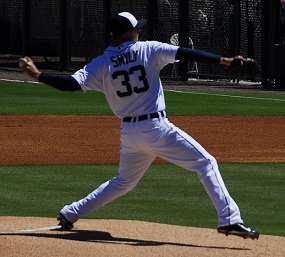 Pitcher Drew Smyly reached the majors with the Detroit Tigers in 2012.

Smyly was selected by the Tigers in the second round of the 2010 amateur draft. The scout was Chris Wimmer. The 68th total pick, he was the third Tigers choice, following Nick Castellanos and Chance Ruffin. He signed for a $1,100,000 bonus, the highest of any pick between numbers 61 and 85. He made his pro debut the following summer with the Lakeland Flying Tigers, going 7-3 with a 2.58 ERA in 14 starts. He was then promoted to the AA Erie SeaWolves, for whom he was 4-3 with a 1.18 ERA in 8 outings. For the year, he struck out 130 in 126 innings and allowed a .227 average. He was named the Tigers Minor League Pitcher of the Year. Despite missing a month with tendonitis, he led Detroit farmhands in ERA, tied for third in wins (behind Jared Wesson and Jay Voss) and was 5th in strikeouts. Baseball America rated him as the Tigers' 3rd-best prospect (after Jacob Turner and Castellanos) and the #16 prospect in the Florida State League (between Oswaldo Arcia and Deck McGuire).

Following the season, he was a member of Team USA in the 2011 Baseball World Cup and the 2011 Pan American Games. In the World Cup, he had two stellar starts for the Bronze Medal winners. Against Greece, he tossed two-hit ball and whiffed seven in six innings, edging Theon Bourdaniotis in a surprising pitching duel, 3-0. He then battled Australia's Clayton Tanner for five scoreless innings (4 hits, no walks, 6 K) before Jeff Beliveau relieved; the US won, 2-1. He was clearly one of the top hurlers in the tournament. Hyoun-taek Oh of South Korea was named the All-Star starting pitcher.

In the Pan American Games, he again starred as the US wound up with a Silver Medal. In his only start, he faced Panama. He held them to four hits, one walk and no runs in six innings while striking out four. Matt Shoemaker relieved and completed the shutout.

He made one start for the Toledo Mud Hens to begin the 2012 campaign, being rocked for three hits, two walks and three runs in 1 2/3 IP in taking the loss.

Despite his rough outing for Toledo to open 2012, he was called up by Detroit (Detroit had started the year with four starting pitchers, carrying Clete Thomas as an extra position player; they waived Thomas when Smyly was called up) and made his debut on April 12th, getting the start against the Tampa Bay Rays and giving up one earned run while striking out four over four innings. The only run came on a homer by Carlos Pena. When Smyly plunked Pena to open the 5th, he was relieved by Collin Balester with a 1-0 deficit. Detroit rallied to win, 7-2. He pitched 23 times for the Tigers as a rookie, 18 as a starter, and finished the year with a record of 4-3, 3.99, with 94 strikeouts in 99 1/3 innings. He moved to the bullpen for the postseason and made a couple of key appearances in the ALCS against the New York Yankees. In Game 1, he pitched scoreless ball in both the 11th and 12 inning at New Yankee Stadium, allowing the Tigers to win the game, 6-4, in 12 innings; he gave up a single hit in the two innings, while striking out 2. In Game 4, he relieved Max Scherzer with two on and two out in the 6th inning and got pinch-hitter Alex Rodriguez to pop up to end the inning. The Tigers went on to win the game, 8-1, completing a four-game sweep that took them to the 2012 World Series. He pitched twice as the Tigers were swept by the San Francisco Giants in the Fall Classic, giving up a run in 1 2/3 innings.

Smyly was undefeated out of the Tigers' bullpen in 2013, with a record of 6-0 in 63 appearances as a middle reliever. he also added 2 saves and pitched 76 innings, striking out 81 batters while allowing only 62 hits and 17 walks. He made six appearances in the postseason, with no decisions and one earned run allowed in 3 innings. The Tigers moved him to the starting rotation in 2014, following the trade of Doug Fister to the Washington Nationals in the off-season. He went 6-9, 3.77 in 20 starts, but the Tigers were concerned that his innings total was going up, while he was not used to pitching so much, and that he was likely to be unavailable for the postseason. That issue became moot when they agreed to trade him to the Tampa Bay Rays as part of the package to acquire former Cy Young Award winner David Price on July 31st. He made 7 starts for Tampa Bay and pitched very well, going 3-1, 1.70 before being shut down in order not to accumulate too many innings. His combined mark was 9-10, 3.24 in 28 games (25 starts), with 133 strikeouts in 153 innings.

In 2015, he was limited to 12 starts after starting the year on the disabled list with shoulder tendinitis, and then being sidelined by a torn labrum after August 16th. He pitched well when he was healthy, going 5-2, 3.11 in his 12 starts and logging 66 2/3 innings during which he struck out 77 opponents. After the season, he could not agree with the Rays on a salary for the 2016 and his case became the first in the majors that year to go all the way to a salary arbitration hearing. He came out out a winner in the process, receiving a salary of $3.75 million while the Rays had been offering $3.2 million. He had back-to-back excellent starts for the Rays in April of that year, but had only a loss to show for his efforts: on April 13th, he gave up only 3 hits in 7 innings and struck out a career-high 11 opponents but lost, 4-1, to the Cleveland Indians, then on April 19th, he gave up only one hit and no runs in 8 innings and again struck out 11, but he left with the game against the Boston Red Sox still scoreless. Erasmo Ramirez and Alex Colome each added a hitless inning to combine on a ten-inning, one-hit shutout that was decided by Kevin Kiermaier's lead-off homer in the top of the 10th, with Ramirez getting credit for the win. He made 30 starts for the Rays, pitching 175 1/3 innings and ending up with a record of 7-12, 4.88 with 167 strikeouts. On January 11, 2017, acquired him in a trade, giving up one major league player - OF Mallex Smith - and two solid prospects, P Ryan Yarbrough and IF Carlos Vargas - to acquire Drew. He was expected to be a key member of the team's starting rotation in the upcoming season.

Smyly's only year with the Mariners in 2017 turned out to be a dud. He made three appearances in spring training and pitched once for Team USA in the 2017 World Baseball Classic but was then sidelined with an elbow injury. The Mariners were hoping that rest would suffice to deal with the problem, but by late June they threw in the towel, stating that Drew would undergo Tommy John surgery and would not return for another year as a result. He became a free agent after the season and on December 12th signed with the Chicago Cubs after having been non-tendered by the Mariners. It was a two-year deal for $10 million, with several significant performance bonuses attached. He did not pitch for the Cubs either, as he missed the entire 2018 season, then on November 2nd was sent to the Texas Rangers for future considerations.

Smyly did make his return to the mound with the Rangers in 2019, but it did not go well as in 13 games, including 9 starts, he was 1-5 with a bloated ERA of 8.42. He also allowed 64 hits and 34 walks in 51 1/3 innings. The Rangers released him on June 25th, then the Milwaukee Brewers signed him but released him in turn after three weeks without activating him, and finally the Philadelphia Phillies gave him a shot. And suddenly, he seemed to find a groove, pitching fairly well over the last two months of the season, as he was 3-2, 4.45 in 12 starts, with all of his other numbers improving: he allowed just 62 hits in 62 2/3 innings, lowered his walks to 21 and struck out 68 batters. He was a free agent again after the season and signed with the San Francisco Giants, for whom he continued to do all right in the abbreviated 2020 season. He pitched just 7 times, for a total of 26 1/3 innings, but he allowed just 9 walks and 20 hits, struck out 42 batters, and posted a solid ERA of 3.42. On November 16th, he changed teams again, signing a one-year deal with the Atlanta Braves for $11.1 million as GM Alex Anthopoulos commented that he had "tremendous upside".