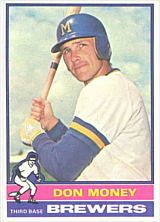 Third baseman Don Money played sixteen seasons in the majors, mostly with the Milwaukee Brewers. A four-time All-Star, he was a sure-handed glove man who earned the nickname "Brooks" (after Brooks Robinson) for his superior defense. After his playing days, he managed and coached in the minors for more than a decade.

Originally a shortstop, Money was signed by the Pittsburgh Pirates and scout Syd Thrift in 1965 and played three years in their organization. With the Raleigh Pirates in 1967, he hit .310 with 16 homers and was the Carolina League MVP. Following that season, he was traded to the Philadelphia Phillies with three other players for future Hall of Famer Jim Bunning. He made his big league debut for the Phillies on April 10, 1968. Starting at shortstop on Opening Day, he went 1-for-3 with 2 RBI in a win against the Los Angeles Dodgers. He was soon back in the minors and hit .303 with 9 home runs for the San Diego Padres of the Pacific Coast League that year, the final year of the minor league Friars.

Back in the majors for good with Philadelphia in 1969, Money was the team's regular at short that year. He homered twice on Opening Day, the youngest player to do that until Bryce Harper surpassed him 44 years later. The following summer, he moved to third base when Larry Bowa emerged as the club's shortstop, and he went on to hit a career-best .295 with 14 homers. The next year, on April 10, 1971, he hit the first-ever home run at Veterans Stadium in Philadelphia. He hit 15 homers in 1972, but with a youngster named Mike Schmidt on the horizon, Money was sent to the Milwaukee Brewers in a blockbuster deal that saw Ken Brett, Jim Lonborg, and Ken Sanders come to Philadelphia on Halloween 1972.

Money spent eleven seasons in Milwaukee and was a four-time All-Star. From September 28, 1973 to July 16, 1974, he went 88 games without committing an error at third base. During his time in Milwaukee, he showed great versatility by regularly playing first, second, and third base; occasionally even shortstop. In 1977, he primarily played second and established career highs with 25 home runs and 83 RBI. The next summer, seeing most of his action at first, he became the first Brewer to ever start in an All-Star Game. In 1982, he mostly saw action as the Brewers' designated hitter. He hit .284 with 16 homers that summer, and his team went to the World Series. Money hit .231 in five games, and Milwaukee fell to the St. Louis Cardinals in seven games.

During his big league days, Money hit equally well against right-handers and left-handers. He hit .261 versus righties and .262 facing southpaws.

Money planned to retire after the 1983 season and work on his farm in New Jersey. The Kintetsu Buffaloes offered him a two-year contract for $900,000 so Money decided to keep playing. He hit .260/.408/.520 with 8 homers in 29 games as a 2B/DH for the Buffaloes in 1984, but his family was unhappy with life in Japan and his daughter did not like her school. Additionally, Money was critical of the team's stadium and the apartment he was given, feeling he had been promised a home in a green setting with trees. Instead he had a cockroach-filled ramshackle apartment. Fans felt that Money could have spent some of his large paycheck to help alleviate these problems and the team offered him a new apartment, a chauffeur and a raise. Money walked away anyway, one of three Americans to desert their team that year (the others were Jim Tracy and Rich Duran). The players were widely criticized for their greed and lack of fortitude and diligence (Source: "You Gotta Have Wa" by Robert Whiting).

After his playing days, Money spent several years as a high school baseball coach. In 1998, he returned to the Brewers organization as skipper of the Beloit Snappers. In seven seasons at the helm, his clubs were runner-up for the Midwest League crown twice. He then led the AA Huntsville Stars for four years, twice losing in the Southern League championship series. From 2009 to 2011, he was the manager of the AAA Nashville Sounds. In 2012, Money stepped out of the manager's chair for the first time, becoming coach for the Helena Brewers.

Money was inducted into the Milwaukee Brewers/Miller Park Walk of Fame in 2005, alongside his former manager Harvey Kuenn.