Turn Ahead the Clock Night 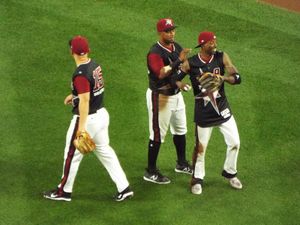 Turn Ahead the Clock was promotion that was a humorous spin on more commonly seen Turn Back the Clock Night promotional events. Unlike Turn Back the Clock Night, when ballplayers wear vintage uniforms reflecting the history of their franchises, Turn Ahead the Clock Night tried to project what the sport might look like in the future. Players wore "futuristic" uniforms on the field, announcers used ridiculous terms to describe game events and positions, and the like. (Such as calling shortstop the "intermediate station," third base "third quadrant," right field "right sector," and referring to the pitcher's mound as the "upper pod.")

Turn Ahead the Clock Night was the brainchild of Seattle Mariners head of marketing Kevin Martinez, stemming from an offhand comment made by Ken Griffey Jr., who pondered what would happen if the team "went to the future," rather than the past as happens during Turn Back the Clock Night. Griffey had a hand in designing the Mariners' uniforms and logo.

The team colors were changed from navy blue and teal to maroon, black and silver. When the uniforms arrived, they had sleeves. However, prior to the game, Junior cut the sleeves off all the uniforms; in addition, many of the Mariners players wore sleeveless undershirts and wore temporary tattoos. (First Baseman David Segui had a real tattoo, before they were commonplace among professional athletes.) Griffey also spray painted his shoes and glove silver for the occasion. Both of these items are now in the Hall of Fame. Also prior to the game, Junior commandeered Rico Rossy's shoes and spray painted them, also, noting "Rico, we're going to the future!" Rossy had just been called up from AAA a few weeks prior and hadn't played in the big leagues since 1993, so he just took it. (Incidentally, he wound up having arguably the best game of his Major League career.)

To start the game, all the Mariners players (except starting pitcher Ken Cloude) wore their jerseys untucked and wore their baseball caps backwards. This, of course, was also orchestrated by Junior. (The umpires made the M's tuck in their jerseys around the 4th inning.) Players' photos displayed on the Kingdome's Diamond Vision were modified to include features from "Star Trek" characters, such as Spock's pointed ears and Geordi's wrap-around glasses. Managers Tony Muser and Lou Piniella were recolored to have green skin.

Their opponent that night was the Kansas City Royals, who had been the M's opponent when the hosted Turn Ahead the Clock Night one year prior. The Mariners noted that the Royals were very good sports and were very easy to work with.

The success and popluarity of the M's promotion led Major League Baseball to experiment with baseball-wide Turn Ahead the Clock games for the 1999 season by designing uniforms for the occasion. Fittingly, Century 21 Corp. was awarded the honor of sponsoring these promotions. The Chicago Cubs, Cincinnati Reds, Los Angeles Dodgers, New York Yankees, Texas Rangers, Houston Astros, Toronto Blue Jays & Montreal Expos all declined to participate in this string of Turn Ahead the Clock games. While the original game was successful and seen as innovative, these games proved to be a weak facsimile and were panned, often being made fun of on national sports television and radio and becoming a national joke.

1999 Turn Ahead the Clock Games[edit]

Turn Ahead the Clock Returns[edit]

The Mariners decided to celebrate the 20th anniversary of Turn Ahead the Clock Night by doing it again, rather than hold Turn Back the Clock Night, which they have taken to doing annually. The game they chose was June 30th against the Royals, who were their opponents in the original. The M's uniforms were designed to be nearly identical to those worn 20 years earlier, but the Royals uniforms were totally different than they were in 1998 and even received a new logo (though their team colors of blue and gold remained.) Only Dee Gordon wore his jersey untucked with his hat backwards; when he led off the bottom of the 1st, the home plate umpire made him tuck in his jersey. Most of the M's pitchers that night also wore their jerseys untucked, but wore their caps the conventional way.