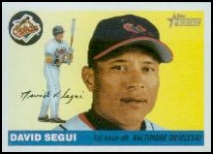 Segui was signed as an 18th round pick in the 1987 amateur draft by the Baltimore Orioles and scout Ray Crone.

In spite of playing over 1,400 games over 15 seasons, he never appeared in a single postseason game.

In June of 2006, Segui admitted to using human growth hormone as a player and that he discussed its use with Jason Grimsley. He also admitted to being one of the players implicated by Grimsley in the FBI investigation into PED use in major league baseball. However Segui used HGH legally with a doctor's prescription. As a result of his confessions, he was listed as a potential witness in the trial of Roger Clemens in the spring of 2012, as prosecutors claimed that back in 2001, their star witness, Clemens' former personal trainer Brian McNamee, had told him that he had saved needles used to inject Clemens. Segui initially did not want to appear at the trial, but Judge Reggie Walton issued him a subpoena, even though it was still uncertain whether Segui would in fact be allowed to testify, given that his testimony could be construed as hearsay. Judge Walton did in fact allow Segui's testimony, which took place on May 24th. Fifteen years later, in 2019, he was still unapologetic, saying that he had taken drugs to heal his body and improve his performance, and had become addicted, like many others do to all kinds of drugs; he said that he did not understand why those who struggle with addiction with social drugs receive support, while those who take PEDs are treated like pariahs. He explained that he was still undergoing a course of testosterone therapy now, under medical supervision, and that it had significant health benefits for him.