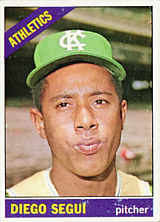 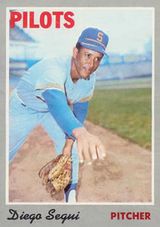 Diego Segui is the brother of minor league pitcher Dario Segui, father of David Segui and minor leaguer Dan Segui, and grandfather of Cory Segui. In 1970, as a member of the Oakland Athletics, he paced the American League in ERA with a 2.56 mark.

Not only did he pitch in the Opening Day game for both the expansion Seattle Pilots in 1969 and the expansion Seattle Mariners in 1977, he is the only player to ever play for both Seattle franchises. Segui went 12-6 with the Pilots, mostly out of the bullpen. As the oldest M's player, he earned the nickname "The Ancient Mariner".

A valuable pitcher for several teams, Segui was a swingman who pitched well in relief but could also fill a spot in the rotation and give his manager an occasional complete game. In addition to the Pilots and Mariners, Segui pitched for the Kansas City and Oakland Athletics, the second Washington Senators, the St. Louis Cardinals, and the Boston Red Sox. He was a member of the Sox's 1975 World Series team, then pitched for the Hawaii Islanders of the Pacific Coast League in 1976, going 11-5 with a 3.18 ERA. He was also a member of the original Islanders team in 1961.

Segui was later a pitching coach for the Pocatello Giants in 1987-1988 and Everett Giants in 1989-1990. Dwight Evans played with both Diego and David Segui.