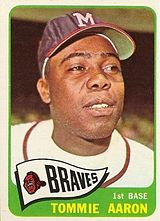 Tommie Aaron was a major leaguer and baseball lifer, involved in various capacities in the Milwaukee Braves/Atlanta Braves organization from 1958, when he first signed, until his death in 1984. In addition to being a player and coach, he was the first black manager in Double A and the first black manager in the International League (source: milb.com). He is the brother of Hall of Famer Hank Aaron, uncle of minor leaguer Lary Aaron and cousin of minor leaguers Wilmer Aaron and Melvin Aaron. He is also related to Ging Aaron.

Tommie reached the majors as a player in 1962, joining his more famous brother in the Milwaukee outfield. He played parts of seven seasons in the big leagues, from 1962 to 1971, hitting .229 in 994 at bats. In 1967, he was MVP of the International League with the Richmond Braves. He appeared in the 1969 NLCS, grounding out to Jerry Koosman of the New York Mets in his only appearance. His 1971 season with Richmond, for whom he played 96 games, was possibly even better than his 1967 MVP season. His .318 batting average was higher than that of 22-year-old Dusty Baker, who hit .311, and 24-year-old Darrell Evans, who hit .307. His slugging percentage was a bit above that of Baker but below that of Evans. Also on the team were Dick Allen's brother, Hank, who hit .267 in limited play, and Jim Breazeale, who led the team in home runs.

After his playing career ended, Aaron managed minor league teams in Savannah, GA and Richmond, VA from 1973 to 1978 and was an Atlanta Braves coach for six seasons from 1979 to 1984. He died tragically of leukemia at age 45. With his track record as a minor league manager and major league coach, if he had not died he might have become the Braves' manager sometime later in the 1980s.

Tommie holds a share of the record for home runs hit by brothers in the major leagues with 768. Hank hit 755 and Tommie slugged 13. The Richmond Braves annually award the "Tommie Aaron Memorial Award" to the player who is the most valuable on the team. In 2008, he was elected to the International League Hall of Fame, both for his success as a ballplayer and for his success as a manager. During his career, he primarily wore number 18. Through 2019, the only other major leaguers with the first name spelled "Tommie" have been Tommie Agee, Tommie Reynolds and Tommie Sisk. Agee and Sisk broke in during the 1962 season, while Reynolds broke in during the 1963 season.

The book Hank Aaron and the Home Run That Changed America stated that Tommie's nickname was "T-Bone" and that he was friends with Cleon Jones, who had played against him in high school.