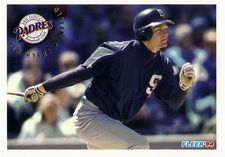 Tim Hyers played ten professional seasons after being selected by the Toronto Blue Jays in the 2nd round of the 1990 amateur draft. He went on to play his first season in the Pioneer League with the Medicine Hat Blue Jays. He managed a .219 batting average with 49 hits in 224 at bats that first year out.

Tim spent the next four years in the minors before getting his first play in the big league game. On December 13, 1993 he was drafted by the San Diego Padres from the Toronto Blue Jays in the 1993 Rule V Draft.

His major league debut occurred on April 4, 1994, against the Atlanta Braves. While playing for the Padres that season, Tim appeared in 52 games with 118 at bats and garnered 30 hits for a .254 average. He also spent time that season with the Las Vegas Stars where he hit for a .255 average.

1995 found Tim back with the Padres but for only 6 games and 5 at bats. He was hustled back to Las Vegas where he finished out the year hitting .290 in 82 games. On November 14th, he was sent to the Detroit Tigers as part of a conditional deal.

Tim went on to log major league time with the Detroit Tigers in 1996 and the Florida Marlins in 1999, finishing with a career fielding average of .990. Hyers also was in the high minors with the Toledo Mud Hens, Charlotte Knights, Tucson Sidewinders and Calgary Cannons before ending his playing days in 1999.

Also an All-Star at the Double-A level, Tim finished second in the running for the 1993 Southern League batting title. He had the opportunity to play with the likes of Tony Gwynn, Steve Finley, Carlos Delgado and Shawn Green.

In 2002, Tim was a coach for the West Michigan Whitecaps. He served as the hitting instructor for the squad that went on to win the regular season championship.

Tim's philosophy of coaching was influenced while playing for Terry Francona, Merv Rettenmund and Bill Buckner. Since the 2002 season Tim has been the owner and operator of Hyers Sports Training in the Atlanta, GA area. As of 2010, he was a Georgia-area scout for the Boston Red Sox, responsible for scouting Miles Head and Brandon Jacobs among others. In 2014, he was the Red Sox's minor league hitting coordinator when he took over as the team's hitting coach for three weeks when Greg Colbrunn was hospitalized in June. In 2016, he was hired by the Los Angeles Dodgers as their assistant hitting coach.