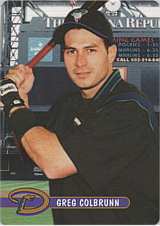 Greg Colbrunn saw action in thirteen seasons, winning a ring and hitting for the cycle with the Arizona Diamondbacks.

A 6th rounder 1987 by the Montreal Expos and scout Jim Holden, Greg was a top catching prospect in the minors, especially after hitting .301 with 29 doubles and 13 homers in 125 games for the Jacksonville Expos in 1990. The Expos brought him up in September, not adding him to the major league roster, in order for him to work on his defense. The plan backfired when he blew out his elbow practicing throwing to second base. He underwent surgery and missed the entire 1991 season, catching only one more inning in his career.

When he returned in 1992, he was a first baseman, making his big league debut on August 6th after hitting .306 in 57 games with the Indianapolis Indians. With Montreal, he was the starting first baseman down the stretch, playing 52 games and hitting .268 with 2 homers and 18 RBI. The Expos were hoping that he would establish himself as a solid big league regular, but he disappointed in his sophomore season, 1993, hitting only .255 with 4 homers and 23 RBI in 70 games and spending a good chunk of the year on the disabled list. The Expos ended up using a bevy of players at first base, including John VanderWal, Frank Bolick, Oreste Marrero and Derrick White in addition to Colbrunn. Greg was placed on waivers at the end of the season and claimed by the Florida Marlins. He found his hitting stroke in Miami, hitting .303 in 47 games in 1994, and then .277 with 23 homers and 89 RBI in 138 games in 1995.

On his retirement, Greg was the hitting coach for the Charleston RiverDogs from 2007-2009 before becoming their manager in 2010. He returned to hitting coach from 2011-2012. Greg was named the Boston Red Sox hitting coach for 2013. On June 5, 2014, he had to be hospitalized in Cleveland when he complained of dizziness and doctors found bleeding within his brain. He made a full recovery and indeed returned to the Sox on June 30th; minor league hitting coordinator Tim Hyers served as the Red Sox's hitting coach during his absence. After the season, Colbrunn resigned due to these health concerns. He went back to coach for Charleston again from 2015-2016 and 2019, spending time in 2017 and 2018 as the Yankees roving minor league hitting instructor.