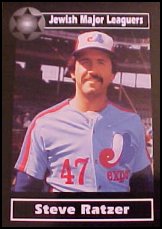 In his senior year of high school, Steve Ratzer was selected to New York's All-City Baseball Team. He was on Team USA in the 1973 Intercontinental Cup, taking Bronze. After college in 1975, he signed with the Montreal Expos as a free agent. Steve's career was delayed - en route to reporting to Lethbridge, AB, he heard that his father had died from a heart attack. Returning home to sit shiva, Ratzer then went to Lethbridge and more than caught up in playing time, appearing in 30 games to tie for the Pioneer League lead. In 24 relief appearances and 6 starts, Ratzer was 3-4 with five saves and a 2.33 ERA, third in the league in ERA and second in saves.

Ratzer earned the Allie Reynolds Award for his great performance for the 1980 Bears, one of the top minor league teams of the decade. In the high-offense environment, Steve had a 3.59 ERA, sixth in the AA. He started 18 games, relieved in 12 more and went 15-4 with 2 saves. He led the league in victories that season. He walked 29 in 163 innings.

Called up to the Expos at the end of the 1980 season, Ratzer had his only Major League Baseball start on October 5th, allowing 5 runs on 9 hits in 4 innings against the Philadelphia Phillies. It was the final game of the season, and the day before, the Expos ahad been eliminated from postseason contention by the Phillies on a homer in extra innings by Mike Schmidt; the Expos went on to win this game in extra innings, but Steve did not figure in the decision. This made him the first Jewish pitcher to appear for a Canada-based MLB team. Ratzer's rocky bump in his fine 1980 season was merely that as he starred in winter ball as well. With the Leones del Escogido of the Dominican League, he went 5-1 with a 1.24 ERA and 14 saves, breaking Kent Tekulve's league record. He won three games in the championship and earned MVP honors as his club won the pennant.

Making the team as a reliever out of spring training, he went 1-1 for the Expos in 1981 with a 6.23 ERA. Surprisingly, the control specialist walked 7 in 17 1/3 IP. He returned to Denver, going 7-3 with a 3.42 mark. He led Escogido to another pennant that winter and was MVP once more. Traded to the New York Mets for Frank Taveras after the season, Ratzer was 11-7 with a 3.08 ERA for the Tidewater Tides and was the Rolaids Minor League Fireman of the Year.

Dealt to the Chicago White Sox and then back to Montreal, Ratzer finished his career at age 29 with a 3-6, 6.75 season for Denver, his 7th season pitching there. Overall, in Organized Baseball, Ratzer went 69-63.

Retiring to spend time with his family of five, he worked in the restaurant business in Denver.