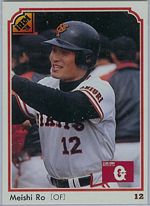 Ming-Tsu Lu has had a long and productive career in Taiwanese baseball. He played every position except for shortstop and pitcher during his career but was primarily an outfielder after starting out as a catcher. He won a Little League World Series then starred on the international stage from 1984-1987. Lu began his professional baseball career in Japan on such a hot note that he led to a rule change as a rookie. He only played four years in Japan, then set a record in his native Taiwan, where he ended his playing career. He later was an announcer and coach in Taiwan. He coached for his homeland in both the World Baseball Classic and Olympics.

Lu was with Taiwan for the 1985 Asian Championship, 1985 Intercontinental Cup (in which he was named the All-Star DH), 1986 Amateur World Series, 1987 Asian Championship and 1987 Intercontinental Cup. He hit .463 and slugged 1.172 in the 1987 Cup, with 6 home runs, but lost All-Tournament honors at catcher to an even more prodigious slugger, Orestes Kindelan. He outhit several future major leaguers on the US squad, including Robin Ventura and John Valentin. [2]

Lu got an offer from the Baltimore Orioles but signed instead with the Yomiuri Giants, because Yomiuri was being managed by the legendary Sadaharu Oh.

Lu started his career in Japan quickly, homering 10 times in his first 18 games; two of those shots were game-winners. He debuted on June 14 and went deep against Bob Gibson on the second pitch he saw as a pro. After that, Lu's production fell due to injuries and fatigue - he finished the 1988 season with a .255/.333/.474 and 16 homers in 274 AB. [3] Lu's quick start led to a change in the NPB All-Star Game rules; previously, only two foreigners were allowed on each team. This was temporarily revised so that Lu could play for the Central League. Author Robert Whiting notes that a similar revision had not been done for an American, such as Jim Paciorek, second in the 1988 CL in average. [4] Lu was criticized by Japanese coaches for not concentrating as much in practice as in game situations and for his swinging for power rather than contact. He did try to fit in with the other culture, saying "I want to be the type of player who is loved by the Japanese fans" and winning praise for his effort by legendary Shigeo Nagashima. [5]