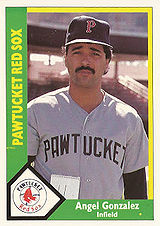 Angel Gonzalez spent six seasons at AAA but never made the majors. His biggest stardom came in Taiwan, where he played for seven years, twice leading in OBP and average.

His US career over, Angel joined the Mercuries Tigers of Taiwan, hitting .315/.348/.502 with 23 steals in 29 tries in 1992. With the Tigers, formed the "foreign Three Musketeers" with Luis Iglesias and Leo Garcia. He tied for second in the CPBL in average, behind only Juan Castillo. He was also second in swipes, behind I-Tseng Lin.

The Dominican infielder hit .313/.361/.508 in 1993 and stole 33 bases but was thrown out 20 times. He finished second to I-Tseng Lin in steals and tied Tai-Chuan Chiang for third in average. In '94, Gonzalez hit for the cycle on March 17. He hit .360/.404/.569 for a career year. He edged Luis de los Santos by .002 for the batting title. He was third in OBP behind Kuei-Chang Tseng and Castillo, was second in slugging (.010 behind George Hinshaw) and led in OPS. He was named to the Best Nine as the top second baseman in the country. It would be his only time taking home that award, which was dominated by Chung-Yi Huang and Shi-Xing Ro during his career in Taiwan.