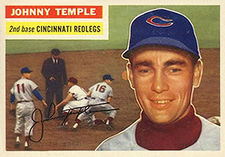 He broke into organized baseball in 1948 at age 20 with the Morganton Aggies in the Western Carolina League. Scouted by Neal Millard before the 1949 season, he was sent from Morganton to the Cincinnati Reds and played for the Ogden Reds in the Pioneer League (1949) and Columbia Reds in the South Atlantic League (1950). He married Rebekah Sheely on September 5, 1950 and played for the Tulsa Oilers of the Texas League in 1951 and 1952.

Temple was 24 years old when he broke into the big leagues on April 15, 1952, with the Cincinnati Reds. He played for Cincinnati until 1959. On June 14, 1958, in Wrigley Field, there was a sacrifice bunt situation in the 2nd inning. Reds' manager Birdie Tebbetts switched second baseman Temple and slow-moving lefty first baseman George Crowe's positions. However, Crowe continued to wear his first baseman's mitt. Temple charged the plate, caught John Briggs' popped-up bunt, and threw to Crowe at first for a double play. On June 27th that same year at Cincinnati, Temple drilled a two-out triple in the 9th inning to drive in two runs as the Reds beat the San Francisco Giants, 6–5. On December 15, 1959, he was traded to the Cleveland Indians for Billy Martin, Gordy Coleman and Cal McLish.

He played for Cleveland in 1960 and 1961, then on November 16, 1961 when he was traded to the Baltimore Orioles for Ray Barker, Harry Chiti, and minor leaguer Art Kay. On April 10, 1962 at Yankee Stadium, Mickey Mantle, Roger Maris and Bill Skowron hit Opening Day homers to lead the New York Yankees to a come-from-behind 7–6 win over Baltimore. Temple, in his first game for the O's, had three hits, including a home run. On August 11th he was purchased by the Houston Colt .45's from the Orioles. He played for Houston the remainder of 1962 and in 1963 until he was released on October 1, 1963. On June 19, 1964 he was signed as a free agent by Cincinnati to be a player-coach, but he was released by the Reds after he played his final major league game on July 8th at age 34, ending his baseball playing career.

He then turned to broadcasting for the Reds and Houston Astros.

When Johnny Temple first came up to the major leagues, one sportswriter described the second baseman as "a throwback to the old-time, hell-bent for leather, tobacco-chewing players of the Ty Cobb era." That throwback became a four-time All-Star, a steady fielder and effective contact hitter who struck out only 338 times in 6,035 plate appearances. Temple was a legitimate leadoff hitter and the popular second baseman for the Redlegs during the 1950s. He hit .300 three times and tied for the National League lead in walks in 1957 with 94. He led National League second basemen three times in putouts and once each in assists and double plays. (JK).

Throughout his outstanding major league career, he walked more often than he struck out, compiling an outstanding 1.92 walk-to-strikeout ratio and a .363 on-base percentage. Temple also had above-average speed and good instincts on the basepaths. Quietly, he had 140 stolen bases in 198 attempts (71%). Defensively, he showed great range with a strong and accurate arm.

In All-Star competition, he was 3 for 15 with two runs, a double, a stolen base and an RBI in 6 games.

After being dismissed by the Reds, Temple engaged in a knock-down-drag-out brawl with fellow coach Reggie Otero. Temple later told reporters, "Twelve years ago I walked into Crosley Field a top-notch professional ballplayer. I'm going out like a bum - beat up, nothing to do and nowhere to go. I'm through in the game."

His troubles, however were just beginning. Temple lost a sizable fortune in bad investments and tax liens, struggled with alcoholism, and was fired from a state job for filing improper expense vouchers. In November 1977 he was arrested in connection with the theft of heavy equipment and charged with grand larceny.

He had black hair and brown eyes, his ancestry was German and his principal hobbies were fishing, refinishing furniture and golf. He died at age 66 at his son's home in Anderson, SC from pancreatic cancer on January 9, 1994 and was cremated. Surviving him were his widow Rebekah Sheely Temple, his son Mike, three brothers and two grandchildren.