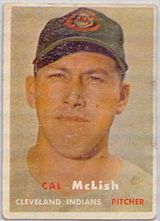 Pitcher Cal McLish overcame a slow start to his big league career to go on to play 15 seasons in the majors, earning a selection to one All-Star Game.

Born in Oklahoma, McLish's parents bequeathed on their son perhaps the longest name in baseball history: Calvin Coolidge Julius Caesar Tuskahoma McLish. Calvin Coolidge, the first part of his name, was the American president at the time of Cal's birth (1925). Julius Caesar, of course, was the Roman leader who helped to move Rome from a Republic to an empire. Tuskahoma, the last part of his name, is derived from the Choctaw language and means great warrior.

After graduation from Central High School in Oklahoma City, McLish signed with the Brooklyn Dodgers in 1944 and went right to the majors as an eighteen-year-old. He posted a 7.82 ERA in 23 outings for the club that summer and then missed the following year while serving in the Army during World War II. He returned to baseball in 1946 and struggled in a handful of appearances for the Dodgers, Pittsburgh Pirates, and Chicago Cubs over the next four seasons.

McLish was signed by the Cleveland Indians following in the 1955 campaign and was back in the majors in 1956, pitching primarily out of the bullpen in his first two years with the club. In the 6th inning of a game against the Boston Red Sox on May 22, 1957, he surrendered four home runs in a span of sixteen pitches (to Gene Mauch, Ted Williams, Dick Gernert and Frank Malzone). Nonetheless, he ended that season with 9 wins and a 2.74 ERA. The next year, 1958, he joined the Cleveland rotation and went 16-8 with a 2.99 ERA, followed up by a 19-8 mark and an All-Star Game selection in 1959.

After the 1959 season, McLish was traded to the Cincinnati Reds. He struggled, going 4-14 in 1960, and was soon dealt to the Chicago White Sox in 1961. Following one summer in Chicago, he was sent to the Philadelphia Phillies, winning 11 and 13 in his first two campaigns there, in 1962 and 1963, before retiring midway through 1964 due to a sore arm.

Following his playing days, McLish was a Phillies coach in 1965 and 1966 under manager Gene Mauch and a Philadelphia scout in 1967 and 1968. He was then one of the original coaches of the expansion Montreal Expos, joining Mauch once again in 1969 and remaining with the club through 1975, which was the length of Mauch's tenure at the helm. He was the Milwaukee Brewers pitching coach from 1976 to 1982. While with the Brewers, his staff included such prominent players as Rollie Fingers, Don Sutton, Pete Vuckovich and Mike Caldwell. He went to the World Series with the team in his final year, 1982.

His brother, Ed McLish, played in the minor leagues.