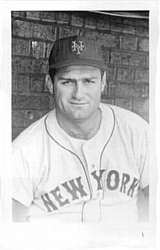 “If they don’t know who they want, then what’s the sense of making the trade? ... There was more to it than that... Cleveland got enough money out of the deal to build a new scoreboard.” - Harry Chiti, on being dealt for himself, to the Chicago Tribune, September 1987

Catcher Harry Chiti holds a special place in MLB history, becoming the first man to ever be traded for himself, the played to be named later in a deal for himself in 1962.

Chiti signed with the Chicago Cubs in June 1950 as an amateur free agent and became the youngest player in the National League when he made it into three games at the end of the season, just 17 years young. After a couple more stints in Chicago, while still a teenager, and two years in the United States Army, he became a semi-regular behind the plate in Wrigley Field in 1955 (belting 11 home runs with 44 RBI in a career best 113 games) before being traded to the New York Yankees for veteran backup receiver Charlie Silvera after the 1956 season.

Harry never made it into pinstripes; he was drafted from the Yankees by the Kansas City Athletics in the 1957 Rule V Draft. After hitting roughly .270 range for two seasons in Kansas City in 1958 and 1959, he was sold to the Detroit Tigers on July 26, 1960. He was with the Tigers until July 21, 1961, did not play up to their expectations, and was traded to the Baltimore Orioles for Frank House. The Orioles sent him to the Rochester Red Wings, their International League farm club and he hit .326 in 46 games. Baltimore then traded him, along with Ray Barker and Art Kay, to the Cleveland Indians for Johnny Temple.

On April 26, 1962, Harry was sold to the New York Mets by the Indians for a player to be named later. He appeared in 15 games for the Mets, hit .195 and was returned to the Indians in another cash transaction on June 15. This finished his ten season big league career. Overall, Harry appeared in 502 games, hitting .238. He spent the next two seasons in the International League and retired after the 1964 season. In the minors, he played 608 games and hit .271.

Chiti retired from baseball at age 30 to work as a district manager for Columbia Pictures, placing films in theaters. In the early 1970s, he became a bailiff in the Shelby County, Tennessee courthouse, before retiring in Winter Haven, FL. He died on January 31, 2002, at age 69 in Haines City, FL. Harry's son, Dom, was a minor league pitcher who became a major league coach.