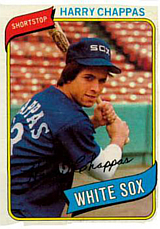 "I began to realize that Bill Veeck just wanted me to be a gimmick to put people in the seats... The first major league contract I signed was made of cardboard and was five feet tall. All these photographers took pictures of me next to it. I didn't know better, so I went along, playing the role of the little guy." - Harry Chappas, to Sports Illustrated, 1997

"He stole some big bases for me… He has a great pair of hands and a great arm. He tries to hit the ball out of the park too much, but he has the tools." - Felipe Alou, one of his managers 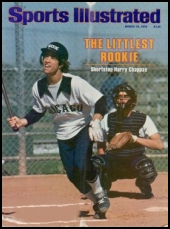 Before Dustin Pedroia and Jose Altuve, there was little Harry Chappas. Listed at 5'3" by Chicago White Sox owner Bill Veeck, he was briefly the toast of baseball as a little shortstop looking to do big things on the south side of Chicago.

Chappas went to Miami-Dade College and was picked in the 21st round of the 1975 amateur draft. He played in the Sox minor league system from 1976 to 1980 when he was not in the majors, hitting over .300 in Single A in 1978 and in Triple A in 1979. With the Appleton Foxes in 1978, a team which won 97 games, he was the team's only .300 hitter and made the league All-Star team. Just 20 years old, Harry was a September call-up in 1978, batting .267 with 11 runs scored in 20 games (75 at bats). The following spring, Harrymania was briefly running wild, with a cover appearance on Sports Illustrated as Veeck played up his diminutive stature in an effort to put butts in Comiskey seats. Things were not on the up and up, it seemed. He stood nose-to-nose with Hall of Famer Phil Rizzuto, who was listed as 5'6". The Sporting News Registers, as well as most yearbooks and history books on the White Sox, made the change but some encyclopedias to date missed it. The White Sox, for what it's worth, announced his height as 5'6" (although The Sporting News Baseball Registers used 5'7").

Harry supplanted incumbent player-manager Don Kessinger at shortstop on Opening Day in 1979, but after two weeks and an uninspiring .059 batting average, it was back to the minors. When his fifteen minutes had expired, he returned in August, belting his lone career home run off Bill Travers of the Milwaukee Brewers in an August 20th game. He recovered in irregular activity to hit .288 in 26 games. Chappas was on the Opening Day roster again in 1980, doing some work at designated hitter while occasionally spelling Greg Pryor at shortstop. After hitting only .160 in 26 games, he was sent back to the minors, done in the bigs at just 22. He played for the Denver Bears, in the Montreal Expos organization, in 1981 and finished his career in 1983 with 19 games in Double A in the Atlanta Braves organization.

Harry had a fascinating and wide array of hobbies. He raised finches and took some of them on the road with him. He also spent much of his nights building model airplanes. Following his playing days, he became a fan and player of jai alai.