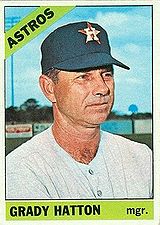 Grady Hatton never saw a major league baseball game until he was 23 years old. He saw that first one on the Cincinnati Reds opening day in 1946... and played in it. It also was the first professional game he had ever played in and he went on to play in some 1,600 more.

He was a Texan who had starred for the University of Texas Longhorns in the early 1940s. But World War II was coming and he was soon to find himself in the United States Army. He was only two hours short of his physical education degree when the military called. He was assigned to the Army Air Force team at Greensboro, NC, a club that made the national semi-pro tournament at Wichita, KS. Pat Patterson, scouting the tournament for the Reds, convinced him to sign as soon as he was discharged. That's what happened and on discharge he drove from Greensboro to Cincinnati, OH to sign. The next thing he knew he was the Reds' third baseman.

He hit .271 with 14 home runs that first season until an accident in August cut his initial season short. He improved on his offensive statistics his second season, but then leveled off, never quite reaching his full potential. One reason was that he faced a lot of left-handed pitching. National League managers saved their lefties for the Reds because the meat part of their batting order was lefthanded.

Hatton made the 1952 All-Star Game roster but did not get into the game. Oddly, 1952 was his worse season at the bat, his average ending at .212. He enjoyed great career stability in Cincinnati, but once that interlude of his life ended, things became hectic. He knocked around the majors and high minors for several years.

After managing the San Antonio Missions for three years, he took over the Houston Buffs of the American Association. He was part of the Chicago Cubs' infamous College of Coaches system at that time, which extended into their minor league ranks, making his stints as a manager short in 1960 and 1961, as he then rotated into coaching positions elsewhere in the organization. He was even re-activated as a player in the second half of the 1960 season, and hit .342 in 28 games mainly as a pinch hitter for the Cubs. When he found stability as manager of the Oklahoma City 89ers of the Pacific Coast League, he led them to league titles in 1963 and 1965. The Sporting News named him Minor League Manager of the Year that last year.

The Houston Astros made him manager in 1966, but the club, although packed with promising young players such as Joe Morgan, Jimmy Wynn, Rusty Staub, Larry Dierker, Dave Giusti, Mike Cuellar and others, never finished higher than eighth. Harry Walker replaced him on June 18, 1968, when the team was in tenth place. Hatton moved into the front office. Although the Astros made him a vice-president, he later coached under manager Leo Durocher.

Grady spent the last years of his life in Warren, TX, where he died peacefully at age 90 in 2013.

Before 1946 Season: Signed by the Cincinnati Reds as an amateur free agent.

April 18, 1954: Traded by the Cincinnati Redlegs to the Chicago White Sox for Johnny Lipon.

August 1, 1956: Purchased by the Baltimore Orioles from the St. Louis Cardinals.