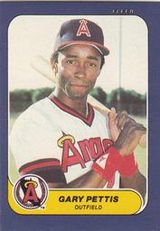 Gary Pettis had been a right-handed hitter throughout his amateur career. When he signed with the California Angels, scout Loyd Christopher noted that Pettis signed with his left hand. This led to the team's conversion of Pettis into a switch-hitter (Source: 1979 Baseball Guide).

Pettis' brother, Stacey Pettis, was a minor league outfielder for the Pittsburgh Pirates and California Angels from 1981 to 1987. His nephew is Marquis Pettis.

When the Angels first brought him to minor-league camp, they were determined to make Pettis an infielder; he only got to show off what he could do as an outfielder as the result of an outfielder's injury.

His career's most recognizable aspect was his ability to "steal home runs," that is, he would run to the fence, jump above the top of it and snare a ball headed over it (a would-be home run) and turn it into an F-8. California Angels coach Jimmie Reese, well-reputed as a fungo bat artist, would practice this with Pettis, fungoing balls at various angles aimed to just clear the fence. Reese turned it onto a game, with Pettis getting points for snaring ones successfully and losing points for missing them.

Pettis was a high-efficiency, high volume base-stealer before high-efficiency was fully appreciated. Through his age 30 season, 1988], he was in the top five A.L. base stealers five times and had an 80% success rate (230 stolen bases, 57 caught stealing).

He had what coaches would consider classic leadoff batter attributes, a switch-hitter with a slap-the-ball approach and great speed who was a high volume and efficiency base-stealer. But over his first five full seasons, his low batting average and low isolated power combined with only a somewhat better-than league average walk rate (11%) made him a bottom of the line-up batter. That changed in 1989, when Detroit Tigers batting coach Vada Pinson taught Pettis to pay more attention to working the count for walks and some new tools with which to achieve it. In 1989, at age 31, Pettis walked in close to 16% of his plate appearances and ground out a .375 on-base percentage. 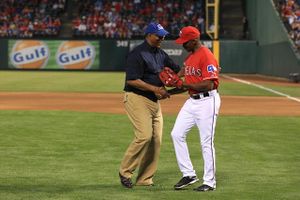 After the 2006 season was over, the Texas Rangers, who finished 80-82 for the year, hired Ron Washington as their new manager to replace Buck Showalter who had been fired at the end of the season. The very first week at the helm, Washington mentioned he would probably hire Gary Pettis as his new first-base coach, which he eventually did. Pettis was a former Texas outfielder, playing there during some of the time close to the end of his career. In fact he won a Gold Glove while playing center-field for Texas in 1990. He stayed on as a coach with the Rangers for Washington's entire tenure at the helm, from 2007 to 2014, a period which included appearances in the 2010 and 2011 World Series. He left after Washington resigned with a few weeks to go in the 2014 season. In 2015 he joined the staff of new Houston Astros manager A.J. Hinch as third base coach and outfield and baserunning outfielder. He was still in the role in 2020 when he was diagnosed with multiple myeloma, a form of cancer, in late September and had to miss the postseason while undergoing treatment.

Gary's son, Dante Pettis [1], played college football for the University of Washington and set the all-time NCAA record for most touchdowns on punt returns and later played in the NFL. His nephew, Austin Pettis [2], has played pro football for the St. Louis Rams. His youngest brother Lynn was not a pro athlete, contrary to many members of the family, but he managed to find his way onto a baseball card by error. In 1984, the Topps photographer was taking pictures of Angels players at the ballpark while Gary's 14-year-old kid brother, who looks a lot like him, was wearing a team uniform (he used to hang around the ballpark and shag fly balls with other relatives of ballplayers). The photographer used his picture on Pettis' 1985 Topps card, not realizing he had the wrong person. This is why Pettis looks unusually young on the card.