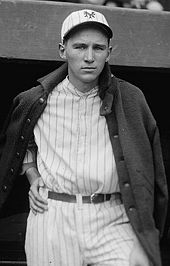 "My greatest thrill? That's easy. It came the day Mr. McGraw named his 20 all-time players. I'm ninth on that list and that is thrill enough to last me a lifetime." - Freddie Lindstrom.

Freddie Lindstrom is generally considered one of the worst selections that the Hall of Fame has made (but see analysis below). In BBWAA voting, he never got as much as 5% of the vote, but he was eventually selected by the Veterans Committee in 1976. That said, he was a decent enough player, which got attention since third basemen of his era were rarely very good (he also played many games in the outfield during the second half of his career due to back injuries which prevented him from playing third). He hit .311 in a thirteen-year career, and the Hall was formerly very focused on high batting averages.

Lindstrom played most of his career with the high-profile New York Giants, coming up originally at age 18 on the 1924 Giants team that won the pennant. That October, he became the youngest player ever to appear in a World Series (a title he still holds). He starred for the Giants in the 1924 World Series, getting ten hits (including four off Walter Johnson) as the team's regular third baseman, but it wasn't enough, as the Washington Senators won the World Championship in seven games.

Lindstrom quickly became a favorite of Giants fans, and he hit over .300 for six straight years, from 1926 to 1931. In 1928, he was second in the MVP voting, finishing close behind Jim Bottomley. Two years later, he put up his best numbers, hitting .379 with a career-high 22 home runs. That year he set an all-time record for the best batting average with runners in scoring position, going 59-for-123 in those situations, for an average of .480. His outspoken disappointment when his friend and fellow Hall-of-Famer Bill Terry was named McGraw's successor instead of him led to his trade to the Pittsburgh Pirates after the 1932 season.

During his Pirates career, in 1934, Lindstrom helped out a young Red Barber who was struggling to succeed as an announcer. The next year, 1935, he played on the pennant-winning Chicago Cubs.

"In 1934 I went to work announcing ball games in Cincinnati. I was inexperienced and thoroughly frightened. I didn’t know one major league player by sight. . . Then a fellow got up off the davenport and said, ‘My name’s Lindstrom. I’ll be glad to do the show with you.’ I have never forgotten his kindness to a kid who was hanging on the ropes." - Red Barber, quoted at Freddie Lindstrom's Hall of Fame page

After his playing days, Lindstrom managed in the minors in the early 1940s. He was later baseball coach at Northwestern University from 1949 to 1961 and also postmaster of Evanston, Illinois, after that. His son, Chuck Lindstrom, played one game in the majors.

Although Freddie Lindstrom is almost always treated as an unworthy selection for the Hall of Fame, there is an argument for his inclusion that is rarely stated. It is as follows: a chief purpose of the Hall of Fame is to honor the top player in each era at each position. The question then is whether Freddie was the best third baseman of his time, which was the 1920s (after 1930 he played other positions due to his back). There is only one other Hall of Fame third baseman who played substantial numbers of games in the 1920s, and that was Pie Traynor. Other esteemed third basemen from the 1920s include Heinie Groh, Willie Kamm, Jimmy Dykes and Ossie Bluege. However, Groh's top years were in the 1910s, and he wasn't that good in the 1920s. As for Kamm, Dykes and Bluege, their career WAR is in the same general range as that of Lindstrom, but they didn't achieve the level of fame Lindstrom did. As for Traynor, his career WAR is also pretty similar to that of Lindstrom (and achieved by Traynor in a longer career). Traynor was widely considered the best third baseman of his time, but his career OPS+ is lower than that of Lindstrom, and Lindstrom's top two single season OPS+ scores outstrip any of Traynor's scores. The conclusion is that if you want to honor any third baseman at all from the 1920s, Traynor and Lindstrom are reasonable choices.