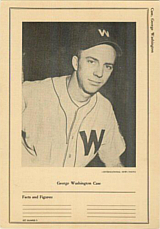 “His raw speed and ability to read pitchers and catchers made him the most feared basestealer in either league.” - Mark Stang, in his 2005 book The Washington Senators On Parade

Speedy outfielder George Case played eleven seasons in the majors, leading the American League in stolen bases in six of them.

Following the 1945 season, Case was dealt to the Cleveland Indians for Jeff Heath. He led the American League in stolen bases for the final time in 1946 with 28. Traded back to Washington after the year in Ohio, he appeared in just 36 games in 1947 before his career was ended by injuries. With the Indians, master showman and new owner Bill Veeck put Case's speed to test against legendary Olympian Jesse Owens in a foot race. Both were perhaps a bit past their prime at the time, but Owens beat Case by a small margin. Clyde Milan, a former Senators player, coach and scout, rated Case's speed greater than any big leaguer he ever saw.

After his playing days, Case coached at Rutgers University from 1950 to 1960. He was a member of the new Washington Senators coaching staff from 1961 to 1963 and the first base coach of the Minnesota Twins in 1968, who happened to be the new incarnation of the old Senators. He died of emphysema at 73 in 1989.