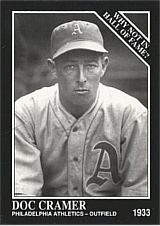 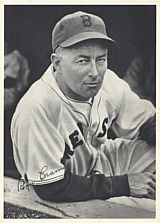 Doc Cramer is routinely mentioned by sabermetricians as a player whose .296 average and 2,705 hits overstate his value. He had a 20-year career in the major leagues, ranking 26th all-time in singles, 69th all-time in hits, 66th all-time in at bats, and tied for 106th all-time in runs scored (as of 2019). He was fortunate to have played much of his career during a lively ball era.

Prior to the bigs, he was a semipro pitcher, playing all over the diamond when not dealing, including outfield, second base and catcher. Cy Perkins, the catcher of the Philadelphia Athletics, discovered Doc while umpiring a semipro doubleheader. Connie Mack signed him and assigned him to the Class D Martinsburg Blue Sox for 1929. In the club's last season before disbanding (to date, no affiliated team has returned to the town), Doc delivered the town some measure of fame by winning the Blue Ridge League batting title, eking out ahead of his future teammate Joe Vosmik. He hit .404/~.459/.593 and was also 2-2 as a pitcher.

This performance enabled Doc to break in for 2 games with the A's, easing in gradually in 1930 and 1931 as the club participated in three straight World Series', winning two of them. Doc spent a fair portion of 1930 with the Portland Beavers, hitting .347. He made his first appearance in a Fall Classic in 1931, rapping one hit in two at bats. In Game 3, he pinch-hit for Lefty Grove, and in Game 7, in the 9th inning with the team behind by four runs, he pinch hit a two-run single to drive in the only A's runs of the game. His bat heated up in 1932, hitting .336/.367/.461 in 92 games with a 6-for-6 day and three runs scored in a June 20 game against the Chicago White Sox. He had two nicknames bestowed upon him at or around this time: "Doc", because he had taken an interest in medicine as a young man, and "Flit" because a sportswriter felt him death to fly balls and there was an insecticide at the time of that name.

Doc broke out as a full-time regular between 1933 and 1935, just in time for Philly to fade to the second division. He played between 149 to 153 games each season, leading the American League in at bats each year while surpassing 100 runs scored by plating 109 times in 1933. On June 10, 1934, Doc was 4-for-5 and hit for the cycle against the New York Yankees. He established an A's record for hits by a left-handed hitter, smacking 202 while batting .311/.353/.411 and scoring 99 times. On July 13, 1935, just five days after his All-Star Game debut, he became the only man in AL history to enjoy two 6-for-6 games, doing the deal again in the first game of a doubleheader with the Detroit Tigers. He finished 8th in AL MVP voting while batting .332/.373/.416, breaking his single-season record for hits by a lefty with 214. To date, no A's left-handed hitter has surpassed him. His OPS+es in Philadelphia were relatively respectable despite the fire sale going on around him, as he topped 100 three of four years as a regular.

On December 12, 1940, Doc was moved to the Washington Senators for Gee Walker. His D.C. tenure would last all of one year as his bat slipped markedly, hitting only .273/.317/.338 in 154 games. He joined the Detroit Tigers in another deal prior to the 1942 season, which is where he would finish his big league bonanza. He enjoyed his last .300 season in 1943, batting .300/.335/.348 in 140 games, hanging around between .260-.300 through to 1948, when he was hitless in four games. As a regular outfielder in 1945, he played on a World Series-winning team, recording 11 hits and scoring 7 times in hitting .379. He hit third in the lineup, ahead of Hank Greenberg, and got 3 hits in the seventh game of the triumph over the Chicago Cubs. Roy Cullenbine, famous for getting copious walks, batted fifth, and while hitting only .227 in the 7 games, he had a higher OBP than Doc. On May 1, 1946, he was ejected from a game for the first time in his major league career. In 1947, he led the league in pinch hits. Except at the end of his career, Cramer usually had fair range factors in the outfield. In 1949, Doc returned to the minors with the Buffalo Bisons and batted .274/~.315/.393 as a backup on the first place club. He saw minimal time for the 1950 Seattle Rainiers to finish his career.

All five of the most similar players to Cramer are in the Hall of Fame, which explains why some people want to put Cramer in as well: Richie Ashburn, Harry Hooper, Nellie Fox, Max Carey, and Lloyd Waner. This overlooks the fact that Cramer's batting average was achieved in much easier times than that of Ashburn or Hooper. Ashburn, for example, won two batting titles while Cramer's closest was in 1935, when he hit .332 and was 17 points behind Buddy Myer. In addition, while Ashburn, Hooper and Carey were all top base stealers, Cramer stole only 62 bases in his career and was caught 73 times. Fox played an infield position rather than the outfield (in a serendipitous circumstance, Cramer, as a batting coach, is credited with helping Fox mature as a hitter), so that leaves Lloyd Waner as probably the closest legitimate comparison. Lloyd hit 20 points higher than Cramer while playing in the National League, which tended to have lower batting averages than the American League. Among the top 300 outfielders listed in The New Bill James Historical Baseball Abstract, Cramer had the lowest winning percentage (.465), not the sign of a player who significantly boosted his teams' performance. Cramer's highest vote total in BBWAA voting for the Hall of Fame was 6%.

After his playing career, he was a coach for the Detroit Tigers in 1948 and for the Chicago White Sox from 1951 to 1953. Upon leaving baseball, he entered the world of carpentry and home building. He died at 85 in New Jersey; a street in the Manahawkin section of the state bears his name.